The players were charged in two separate indictments filed in federal court in Kentucky, accusing them of conspiracy, wire fraud and healthcare fraud. Prosecutors allege they submitted nearly $4 million in phony claims, leading to payouts of about $3.4 million between June 2017 and December 2018.

Those charged include five former players on the Washington Redskins, including Clinton Portis and Carlos Rogers.

Prosecutors allege the players targeted the Gene Upshaw NFL Player Health Reimbursement Account Plan, which was established as part of a collective bargaining agreement in 2006. It provides tax-free reimbursement of out-of-pocket medical care expenses that were not covered by insurance and that were incurred by former players, their spouses and dependents.

“As outlined in the indictments, a group of former players brazenly defrauded the plan by seeking reimbursements for expensive medical equipment that they never purchased,” said Assistant Attorney General Brian Benczkowski, who leads the Justice Department’s criminal division.

The players claimed to have purchased hyperbaric oxygen chambers, ultrasound machines and electromagnetic therapy devices that were designed to be used on horses, he said.

Prosecutors say the group’s alleged ringleaders, Robert McCune and Cornell Buckhalter — who they allege broke off to create his own similar ring — would recruit former players by offering to submit fake claims to the health care plan. The ringleaders would then demand thousands of dollars in kickbacks for each fake claim, prosecutors allege. 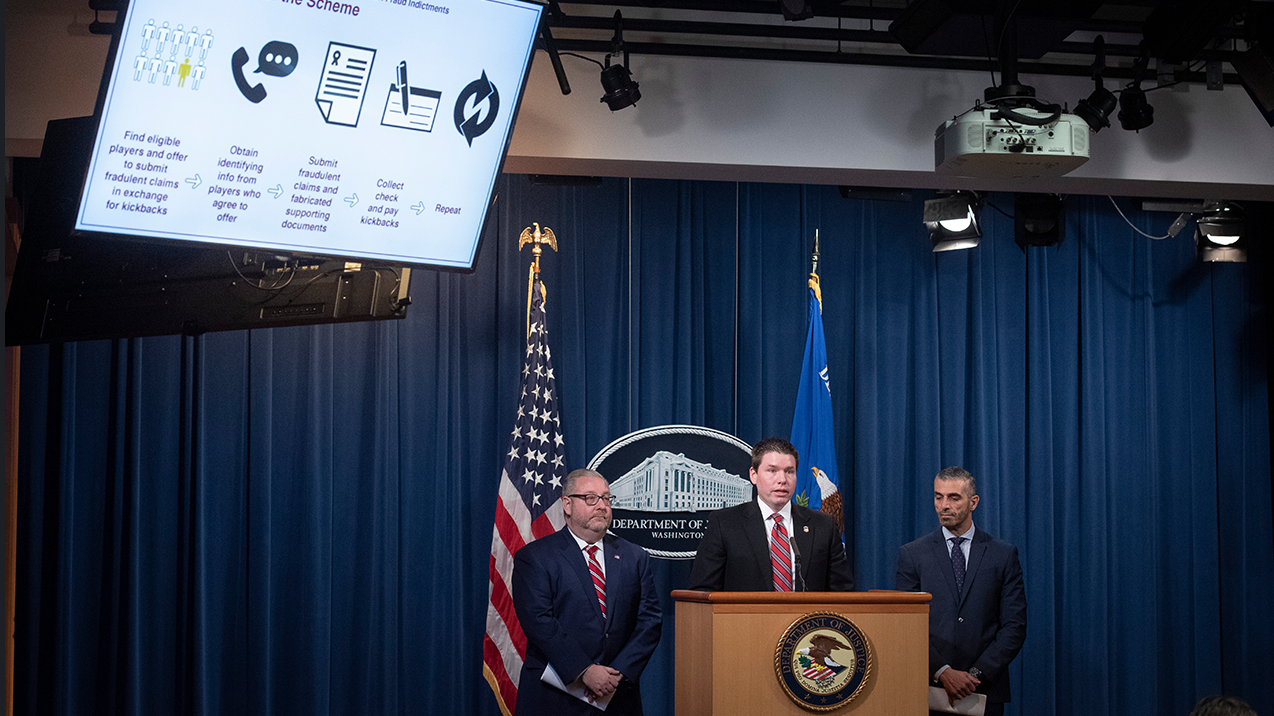 Investigators believe the defendants had forged the prescriptions and authorization letters and uncovered no evidence that any doctors were complicit in the scheme, Benczkowski said.

After the phony claims were submitted, the former players would receive reimbursement checks and pay a kickback to the ringleaders and recruiters, the indictments charge.

Four of the suspects, McCune, Rogers, John Eubanks and Ceandris Brown, were arrested Thursday morning by the FBI. Six others had agreed to surrender to authorities, the Justice Department said. They are: James Butler, Fredrick Bennett, Etric Pruitt, Tamarick Vanover, Portis and Buckhalter.

The Justice Department has also filed court papers in Kentucky noting that it plans to file charges against two other players as well, including Joe Horn, a four-time Pro Bowl wide receiver for the New Orleans Saints, and Donald “Reche” Caldwell.

The investigation was continuing, but because the plan involves only former players prosecutors do not expect any current NFL players to face charges, Benczkowski said.