PORT FOURCHON, La. (AP) — The U.S. Coast Guard is searching for a dozen people in waters off the coast of Louisiana where one person died and six were pulled from rough seas when their commercial vessel capsized.

Coast Guard Capt. Will Watson said Wednesday that one dead worker had been pulled from the water. 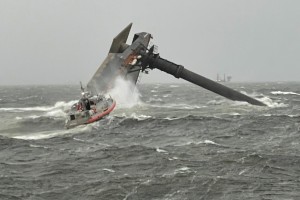 The workers had been on the Seacor Power, an oil industry lift vessel that drops massive legs to the sea floor and becomes an offshore platform.

The ship flipped over Tuesday in hurricane-force winds and high seas. Watson said the weather’s role in the capsizing was under investigation

Body of man found in canoe in Oceanside riverbed inlet