2020 preview? Feud between President Trump and Joe Biden flares up

NEW YORK (AP) — Democrats won’t pick their nominee for another year, but President Donald Trump and former Vice President Joe Biden are acting like the 2020 presidential contest is already a two-man race.

Almost completely ignoring his 23 Democratic competitors , Biden has been laser-focused on Trump — particularly his embrace of racist rhetoric . But it has been Trump’s recent focus on Biden that has surprised both his allies and critics, who believe the Republican president may be unintentionally elevating someone whose candidacy is barely a month old.

Trump’s advisers have privately encouraged him to lay off Biden. He has done the opposite, lobbing more public insults at the former vice president than any other Democrat over the month. Trump’s latest attack was perhaps his most brazen: During a state visit to Japan on Monday, he agreed with North Korean leader Kim Jong Un’s recent description of Biden as a “low-IQ individual.”

A Biden campaign aide on Tuesday called the comments “beneath the dignity of the office.” The campaign said it waited a day to respond out of respect for Memorial Day, a holiday that honors the service of military veterans. 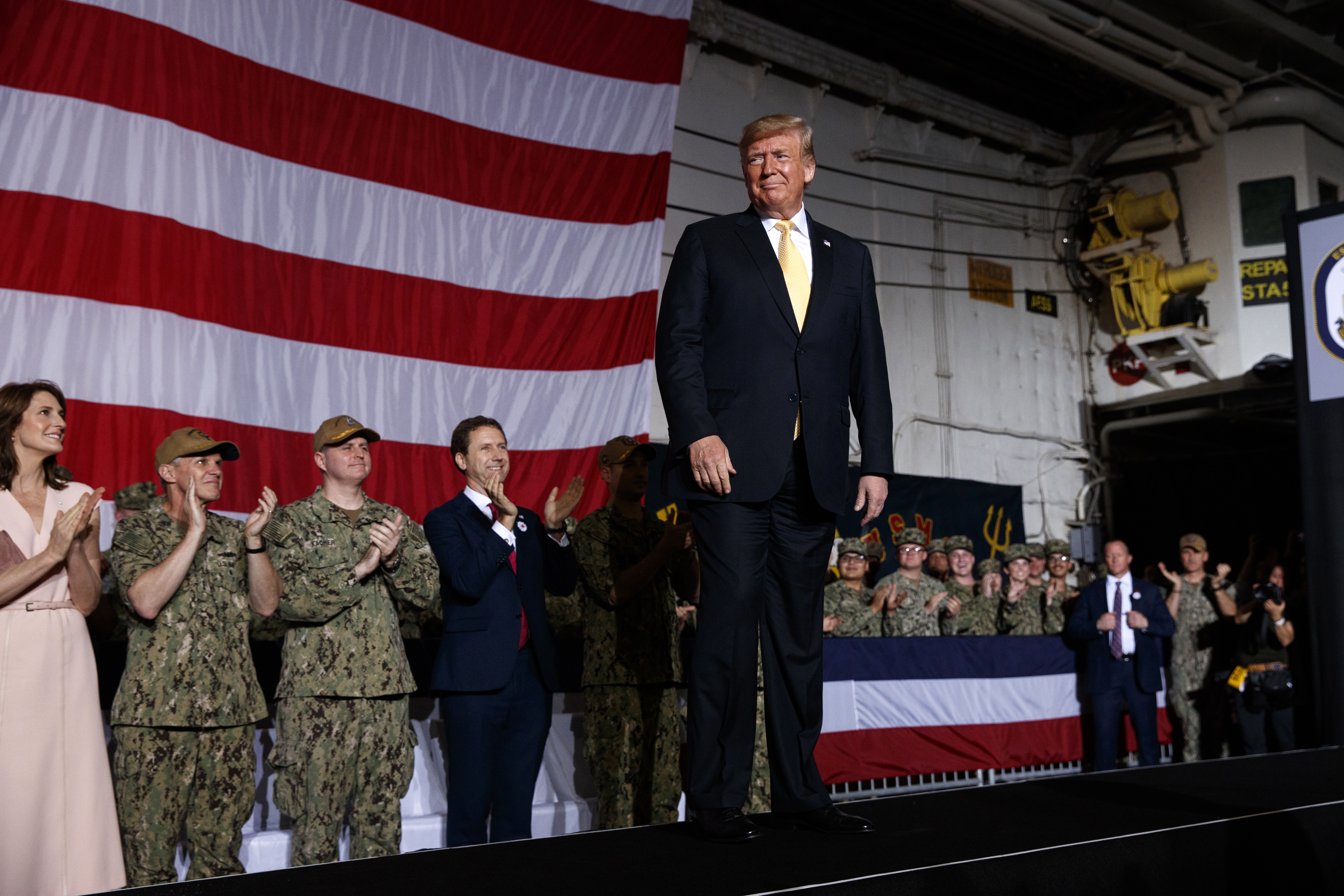 President Donald Trump arrives on stage to speak to troops at a Memorial Day event aboard the USS Wasp, Tuesday, May 28, 2019, in Yokosuka, Japan. (AP Photo/Evan Vucci)

“To be on foreign soil, on Memorial Day, and to side repeatedly with a murderous dictator against a fellow American and former vice president speaks for itself,” said Biden deputy campaign manager Kate Bedingfield.

Democrats on the ground in key primary states report that the intensifying feud has strengthened Biden’s argument that he’s best positioned to take down Trump in 2020. For many voters, nothing matters more than electability. And with Trump’s help, Biden is dominating that debate.

Regardless of the short-term political fallout, it’s becoming increasingly clear that Trump and his allies view Biden as their most formidable opponent. And the anti-Biden assault could become more organized and intense should Biden maintain his front-runner status in the coming months.

“Trump seems to be obsessed with Biden, which suggests that he’s afraid of him,” said Gary Pearce, a longtime Democratic operative based in North Carolina.

“Clearly, the reason Trump is going after Biden is because he’s perceived as the biggest threat,” Republican strategist Alice Stewart concurred. “From Biden’s standpoint, you couldn’t ask for a better situation.”

Trump’s attacks on Biden are not part of an organized strategy, according to three people familiar with the campaign’s thinking who spoke on the condition of anonymity to discuss internal matters. They described the situation as Trump tweeting and the campaign and the Republican National Committee working overtime to keep up — as evidenced by the delays in both entities in amplifying the president’s message. It’s consistent with Trump’s view of himself as his own political strategist, prioritizing his gut over the advice of aides.

In recent weeks, the president has attacked Biden’s intelligence, his energy level, his history of unwanted touching, his record on criminal justice reform and his dedication to Pennsylvania. Trump told Pennsylvania voters during a rally last week that Biden “deserted” them. Biden, a native of Scranton, Pennsylvania, left the state as a child when his parents relocated for work.

“I’ve never forgotten where I came from. My family did have to leave Pennsylvania when I was 10 — we moved to Delaware where my Dad found a job that could provide for our family,” Biden tweeted. “Trump doesn’t understand the struggles working folks go through.”

But Trump went further on Monday when he swiped at the former vice president on foreign soil, choosing Kim’s side over Biden’s when asked about the North Korean leader’s description of the Democrat’s intelligence level.

“I don’t take sides as to who I’m in favor or who I’m not,” Trump told reporters in Japan when asked whether he was favoring a violent dictator over the former vice president. “But I can tell you that Joe Biden was a disaster.”

Trump added: “Kim Jong Un made a statement that Joe Biden is a low-IQ individual. He probably is, based on his record. I think I agree with him on that.”

On Tuesday, Trump claimed that he “was actually sticking up” for Biden in Japan. He said that Kim had referred to Biden as a “low IQ idiot” and that he had “related the quote of Chairman Kim as a much softer ‘low IQ individual.’

“Who could possibly be upset with that?” the president tweeted.

I was actually sticking up for Sleepy Joe Biden while on foreign soil. Kim Jong Un called him a “low IQ idiot,” and many other things, whereas I related the quote of Chairman Kim as a much softer “low IQ individual.” Who could possibly be upset with that?

Trump’s swipes against Biden have been the subject of significant internal debate in the halls of the West Wing and his reelection campaign.

Several officials, including Trump’s senior adviser and son-in-law Jared Kushner, have expressed reservations that the president is helping Biden, whom they view as his strongest opponent, according to the three people familiar with the campaign’s thinking. Trump may be highlighting Biden’s vulnerabilities for progressive voters, especially when it comes to his history on criminal justice issues. But in attacking the former vice president, some aides believe Trump risks turning Biden into a cause célèbre for Democratic voters who are most animated by their dislike of Trump.

That could prove especially problematic if Biden proves most resistant to the Trump campaign’s entrenched strategy to paint all of Trump’s opponents as “socialists.” Biden’s blue-collar appeal in Michigan, Pennsylvania and Wisconsin poses the deepest threat to the president’s path to 270 electoral votes.

Others in Trump’s orbit are less worried and believe Biden might be the easiest to beat of the Democratic field.

“I happen to believe Biden would be the weakest of the general election candidates because he’ll be carrying 47 years of baggage and will have many of same vulnerabilities as (Hillary) Clinton,” said Trump’s 2016 senior communications adviser, Jason Miller.

“Why is he going after Biden? Biden is leading in the polls. He can beat ’em up,” Deason said. “I think he’s the only real legitimate contestant in the field. And I think it would be a shame for Democrats to end their race to the left and nominate him.”

Still, few Biden supporters view the attention from the president as a bad thing.

“Over the last week, President Trump has repeatedly insulted Joe Biden — even going so far as to side with North Korean dictator Kim Jong Un. Why? It’s simple: Trump’s afraid he’s going to lose,” says the fundraising appeal.

It adds: “Let’s use this opportunity to show Donald Trump he should be scared of our momentum.”