A family of six was on an outing in the park about 4:15 p.m. Monday, with the young boy leading the way, when he was attacked by the cougar, according to Orange County Fire Authority Capt. Tony Bommarito.

The mountain lion grabbed the boy by the neck and only released him when his father threw a backpack at the animal, Bommarito said. The mountain lion then jumped into a tree with the backpack.

The boy was taken to a hospital for treatment of what were described as non-life-threatening neck injuries and cuts and was released Monday evening to recuperate at home, Bommarito said.

The park was evacuated by Orange County sheriff’s deputies, who flew over the park in a helicopter and used a loudspeaker to instruct people to leave. 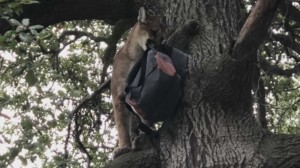 The park will remain closed until further notice, Bommarito said.

A 35-year-old cyclist, Mark Reynolds, was killed by a mountain lion in the park in 2004. He was fixing his bike when he was attacked by the puma, which then attacked two other people who found Reynolds’ body. That mountain lion was later tracked down and killed.

Search continues for teenager who drowned off Mission Beach

What does the Supreme Court gun decision mean for national gun rights?

What does the Supreme Court gun decision mean for national gun rights?

FDA orders Juul e-cigarettes to be pulled from the U.S. market amid teen vaping surge

Dump truck crashes off I-8 connector in Mission Valley