The current 38th district covers much of inland San Diego County, and is represented by Republican State Senator Brian Jones. In 2022, Brian Jones will be campaigning for the 40th State Senate District.

In 2022, three candidates will be campaigning to represent the newly drawn 38th State Senate District.

Gunderson says he is businessman, not a politician, and aims to bring real solutions to Sacramento. He sold his businesses last March, but instead of leaving California like so many others, Gunderson decided to run for office and make changes that way.

He says the top issues for the district are affordability, cost of living, and the importance of getting back local control. He realizes California is a blue state, so he intends to make some of Sacramento’s bad legislation, better.

Tuesday on Good Morning San Diego, Gunderson explained to KUSI’s Lauren Phinney that his opponent, Encinitas Mayor Catherine Blakespear, is far too left for the people of the new 38th State Senate District.

If you didn’t know, Encinitas Mayor Catherine Blakespear (D), is also the Chair of SANDAG. A recent audit, found that SANDAG’s leaders abused a taxpayer funded credit card, spending hundreds of thousands of dollars on lavish filet mignon dinners and other upscale dining.

SANDAG’s unelected Executive Director, Hasan Ikhrata, was one of the main culprits. Ikhrata makes $580,000 per year, with ten weeks of paid vacation, and still regularly chose to use the taxpayer funded credit card, racking up tens of thousands of dollars.

Since the audit was revealed, Ikhrata and Blakespear have both released statements claiming they would be stricter on use of this credit card, but critics aren’t buying it, many telling KUSI the damage has already been done.

KUSI has repeatedly reached out to both SANDAG leaders to speak about this audit on our broadcast, both of them have declined all our requests.

While refusing to speak to voters about one of the biggest scandals in San Diego County politics, Catherine Blakespear is also asking voters to promote her to the State Senate.

Ballots for the 38th State Senate election primary go out Monday, May 9.

Regarding the SANDAG scandal, candidate Matt Gunderson explained “it’s all about transparency and accountability.” Adding that he believes this is a sign of how Blakespear “will likely handle things in Sacramento.”

Gunderson continued to say Blakespear’s “deafening silence and disregard for challenging some of the ridiculous expenditures remind me of something my grandmother would have said; they’re spending money like drunken sailors, with no regard for whose money they’re spending. And I think that’s a real problem.”

Gunderson concluded by warning voters of a major difference between him and Blakespear, which is that “she buys into the idea that big government is a solution and it shouldn’t be challenged.”

KUSI reached out to Mayor Blakespear again, but she declined. 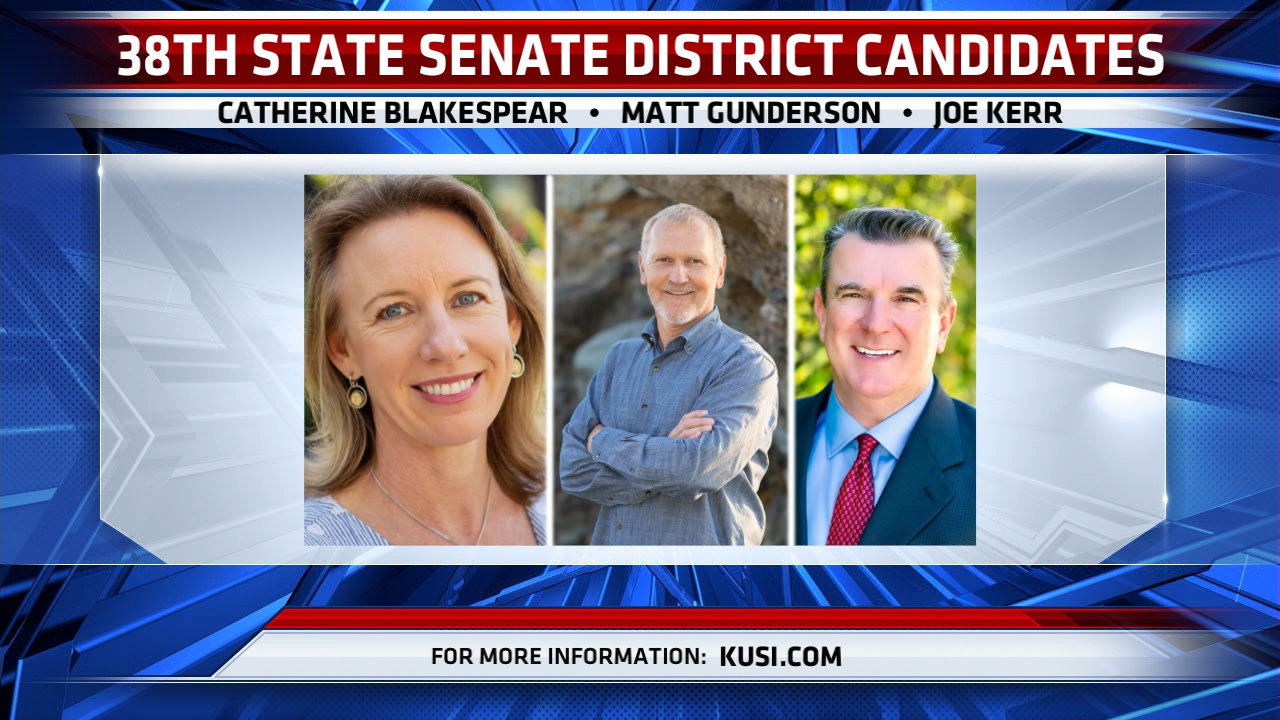 Gunderson called out Blakespear for her refusal to address the public about the SANDAG audit, which she is the Chair of.