3rd major COVID-19 vaccine shown to be effective and cheaper 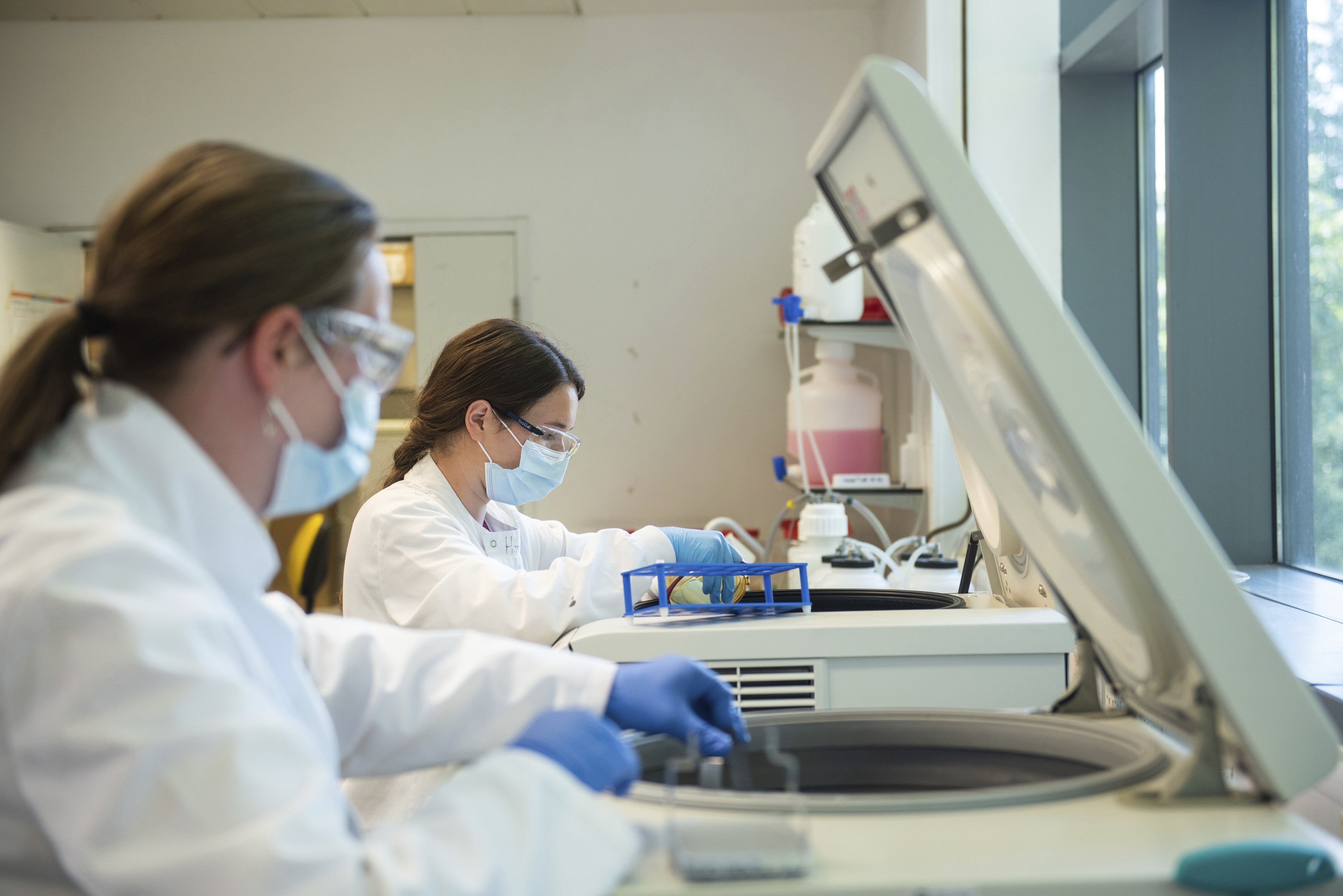 In this undated photo issued by the University of Oxford, Oxford Vaccine Group researchers in a laboratory in Oxford, England, work on the coronavirus vaccine developed by AstraZeneca and Oxford University. Pharmaceutical company AstraZeneca said Monday Nov. 23, 2020, that late-stage trials showed its coronavirus vaccine was up to 90% effective, giving public health officials hope they may soon have access to a vaccine that is cheaper and easier to distribute than some of its rivals. (University of Oxford/John Cairns via AP)

LONDON (AP) — Drugmaker AstraZeneca said Monday that late-stage trials showed its COVID-19 vaccine is highly effective, buoying the prospects of a relatively cheap, easy-to-store product that may become the vaccine of choice for the developing world.

The results are based on an interim analysis of trials in the U.K. and Brazil of a vaccine developed by Oxford University and manufactured by AstraZeneca. No hospitalizations or severe cases of COVID-19 were reported in those receiving the vaccine.

AstraZeneca is the third major drug company to report late-stage data for a potential COVID-19 vaccine as the world waits for scientific breakthroughs that will end a pandemic that has pummeled the world economy and led to 1.4 million deaths. But unlike the others, the Oxford-AstraZeneca vaccine doesn’t have to be stored at freezer temperatures, making it potentially easier to distribute, especially in developing countries.

“I think these are really exciting results,” Dr. Andrew Pollard, chief investigator for the trial, said at a news conference. “Because the vaccine can be stored at fridge temperatures, it can be distributed around the world using the normal immunization distribution system. And so our goal … to make sure that we have a vaccine that was accessible everywhere, I think we’ve actually managed to do that.”

The Oxford-AstraZeneca vaccine was 90% effective in preventing COVID-19 in one of the dosing regimens tested; it was less effective in another. Earlier this month, rival drugmakers Pfizer and Moderna reported preliminary results from late-stage trials showing their vaccines were almost 95% effective.

The AstraZeneca vaccine is also cheaper.

AstraZeneca, which has pledged it won’t make a profit on the vaccine during the pandemic, has reached agreements with governments and international health organizations that put its cost at about $2.50 a dose. Pfizer’s vaccine costs about $20, while Moderna’s is $15 to $25, based on agreements the companies have struck to supply their vaccines to the U.S. government.

All three vaccines must be approved by regulators before they can be widely distributed.

Oxford researchers and AstraZeneca stressed they weren’t competing with other projects and said multiple vaccines would be needed to reach enough of the world’s population to end the pandemic.

“We need to be able to make a lot of vaccine for the world quickly, and it’s best if we can do it with different technologies so that if one technology runs into a roadblock, then we’ve got alternatives, we’ve got diversity,” professor Sarah Gilbert, a leader of the Oxford team, told The Associated Press. “Diversity is going to be good here, but also in terms of manufacturing, we don’t want to run out of raw materials.”

AstraZeneca said it will immediately apply for early approval of the vaccine where possible, and it will seek an emergency use listing from the World Health Organization, so it can make the vaccine available in low-income countries.

The AstraZeneca trial looked at two different dosing regimens. A half-dose of the vaccine followed by a full dose at least one month later was 90% effective. Another approach, giving patients two full doses one month apart, was 62% effective.

That means that, overall, when both ways of dosing are considered, the vaccine showed an efficacy rate of 70%.

Gilbert said researchers aren’t sure why giving a half-dose followed by a larger dose was more effective, and they plan to investigate further. But the answer is probably related to providing exactly the right amount of vaccine to get the best response, she said.

“It’s the Goldilocks amount that you want, I think, not too little and not too much. Too much could give you a poor quality response as well …,” she said. “I’m glad that we looked at more than one dose because it turns out to be really important.”

The vaccine uses a weakened version of a common cold virus that is combined with genetic material for the characteristic spike protein of the virus that causes COVID-19. After vaccination, the spike protein primes the immune system to attack the virus if it later infects the body.

Peter Openshaw, professor of experimental medicine at Imperial College London, said the finding that a smaller initial dose is more effective than a larger one is good news because it may reduce costs and mean more people can be vaccinated with a given supply of the vaccine.

“The report that an initial half-dose is better than a full dose seems counterintuitive for those of us thinking of vaccines as normal drugs: With drugs, we expect that higher doses have bigger effects, and more side-effects,” he said. “But the immune system does not work like that.”

The results reported Monday come from trials in the U.K. and Brazil that involved 23,000 people. Of those, 11,636 people received the vaccine — while the rest got a placebo.

Overall, there were 131 cases of COVID-19. Details on how many people in the various groups became ill weren’t released Monday, but researchers said they will be published in the next 24 hours.

Late-stage trials of the vaccine are also underway in the U.S., Japan, Russia, South Africa, Kenya and Latin America, with further trials planned for other European and Asian countries.

Researchers said they expect to add the half dose-full dose regimen to the U.S. trial in a “matter of weeks.’’ Before doing so they must discuss the changes with the U.S. Food and Drug Administration.

The AstraZeneca trials were paused earlier this year after a participant in the U.K. study reported a rare neurological illness. While the trials were quickly restarted in most countries after investigators determined the condition wasn’t related to the vaccine, the FDA delayed the U.S. study for more than a month before it was allowed to resume.

AstraZeneca has been ramping up manufacturing capacity, so it can supply hundreds of millions of doses of the vaccine starting in January, Chief Executive Pascal Soriot said earlier this month.

Soriot said Monday that the Oxford vaccine’s simpler supply chain and AstraZeneca’s commitment to provide it on a nonprofit basis during the pandemic mean it will be affordable and available to people around the world.

“This vaccine’s efficacy and safety confirm that it will be highly effective against COVID-19 and will have an immediate impact on this public health emergency,’’ Soriot said.

British Health Secretary Matt Hancock said he felt “a great sense of relief” at the news from AstraZeneca.

Britain has ordered 100 million doses of the vaccine, and the government says several million doses can be produced before the end of the year if it is approved by regulators.

Just months ago, “the idea that by November we would have three vaccines, all of which have got high effectiveness … I would have given my eye teeth for,” Hancock said.

From the beginning of their collaboration with AstraZeneca, Oxford scientists have demanded that the vaccine be made available equitably to everyone in the world so rich countries can’t corner the market as has happened during previous pandemics.

Leaders of the world’s most powerful nations on Sunday agreed to work together to ensure “affordable and equitable access” to COVID-19 drugs, tests and vaccines.

“If we don’t have the vaccine available in many, many countries, and we just protect a small number of them, then we can’t go back to normal because the virus is going to keep coming back and causing problems again,” Gilbert said. “No one is safe until we’re all safe.”

San Diego County expands vaccine to 75 and older, 65 and older next week

Man allegedly hid 3 months at Chicago airport due to virus

San Diego County expands vaccine to 75 and older, 65 and older next week