SAN DIEGO (KUSI) – Authorities announced a five-figure reward today for information leading to the capture of a 37-year-old ex-Marine suspected of fleeing the country after allegedly murdering his girlfriend at an Allied Gardens apartment nearly five years ago. 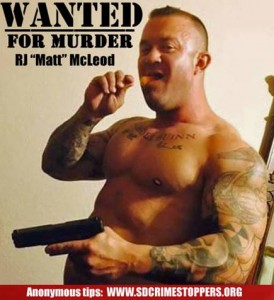 “Raymond McLeod will be the first fugitive in history on our 15 Most Wanted List with an initial reward of up to $50,000,” said U.S. Marshal Service Director Donald Washington. “We want McLeod’s new status as a 15-most-wanted fugitive and the $50,000 reward amount to be broadcasted far and wide. McLeod poses a significant threat to the public and must be brought to justice.”

The former serviceman’s girlfriend, 30-year-old Krystal Mitchell, was found beaten and strangled at an acquaintance’s residence in the 7600 block of Mission Gorge Road early on the afternoon of June 10, 2016. Mitchell and McLeod, both residents of Phoenix, Arizona, were in San Diego visiting friends at the time, according to police.

McLeod — a single father and avid bodybuilder with a reputation as a heavy drinker and a history of domestic violence — vanished following the woman’s violent death and has remained at large since, authorities said.

Investigators believe McLeod fled through Mexico to Central America, where he reportedly was sighted in Guatemala in 2017 and in Belize the following year. The suspect, who often has gone by the nickname “R.J.,” now may be identifying himself as Matt or Mateo and is believed to have grown a beard as a disguise.

McLeod is described as a 5-foot-11-inch white man with brown hair, hazel eyes and prominent tattoos on his chest and arms. At the time of his disappearance, he weighed about 245 pounds and had a muscular physique.

The public is advised to consider him armed and dangerous.

“The passage of time will never deter the marshals’ fugitive investigation for McLeod,” said U.S. Marshal Steve Stafford of the Southern District of California. “If anything, it fuels our determination. We will leave no stone unturned until he is brought to justice.”

Anyone who might be able to help authorities track down he suspect is asked to call the Marshals Service at 1-877-WANTED-2 or contact the agency online at www.usmarshals.gov/tips. 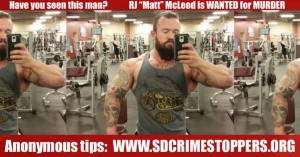