A complete list of all the winners at the 2021 Oscars

Anthony Hopkins, meanwhile, scored a small upset win the best-actor category for his work as a man struggling to maintain his independence while his memory fades in “The Father.” Many pundits had anticipated a posthumous win for sentimental favorite Chadwick Boseman in “Ma Rainey’s Black Bottom.” 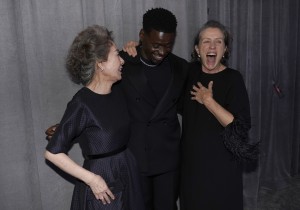 The win was the second of Hopkins’ career, following “Silence of the Lambs.”

But “Nomadland” was the big winner of the night. Zhao, accepting the best-picture award, gave thanks to the “nomadic community” and “all the people we met on the road.”

“Thank you for teaching us the power of resilience and hope and for reminding us what true kindness looks like,” she said.

Earlier in the evening, Zhao reflected on her upbringing when she accepted her historic Oscar for best director.

“I’ve been thinking a lot lately about how I keep going when things get hard,” Zhao told the sparse crowd at downtown’s Union Station, where the ceremony was moved in response to the COVID-19 pandemic. “And I think it goes back to something I learned when i was a kid. … My dad and I used to play this game We would memorize classic Chinese poems and texts and we would recite it together and try to finish each other’s sentences. And there is one I remember so dearly, it’s called the Three Character Classics. And the first phrase goes … `people at birth are inherently good.’

“And those six letters had such a great impact on me when I was a kid, and I still truly believe that today, even though sometimes it might seem like the opposite is true,” she said. “I have always found goodness in the people I’ve met everywhere I went in the world. This is for anyone who had the faith and the courage to hold onto the goodness in themselves and to hold onto the goodness in each other, no matter how difficult it is to do that. This is for you. You inspired me to keep going.”

The nominees represented a huge advance in diversity, but one oft-predicted outcome was not meant to be: a sweep of the acting categories by actors of color.

International film: “ Another Round,” Denmark

Animated short film: “If Anything Happens I Love You”

Logan Heights Duplex Plagued by Crime to be Vacated, Rehabilitated