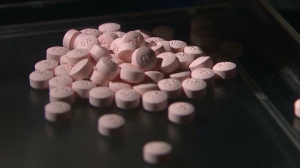 According to an indictment partially unsealed Monday, more than $32 million in drug profits were laundered by the organization, which allegedly secured contracts with Mexican drug trafficking organizations such as the Sinaloa Cartel and Jalisco New Generation Cartel.

After picking up drug proceeds in cities across the United States, the organization allegedly used burner phones and code phrases to communicate with couriers and bank account holders.

Couriers traveled into the United States through San Diego and picked up bulk cash, which prosecutors say was often hidden in trash bags, duffel bags and shoeboxes. The money was then deposited into funnel accounts, then wired to personal bank accounts in Mexico in order to reach the drug trafficking organizations there, prosecutors said.

The U.S. Attorney’s Office said 21 of the 29 defendants were arrested over the past week in San Diego, Calexico and Bakersfield.