SAN DIEGO (KUSI) – The Board of Supervisors Tuesday unanimously chose Anthony Ray to serve as the interim sheriff of San Diego County.

Ray, an assistant county sheriff who oversees courts and human resources, will fill the role previously held by Bill Gore, who stepped down last month after serving a dozen years in the position. The 74-year-old Gore announced last summer that he would not seek re-election this year.

Ray will serve until the winner of the November election takes over. Before formally assuming the interim sheriff’s post, he will have to undergo a background check.

“I believe I’m uniquely qualified to the job, as I’m already inside the department,” Ray said in an opening statement to the board, which made its decision after an hour-long forum that included asking candidates questions and hearing from the public.

Ray said his goals include improving recruitment, striving for more accountability and expanded community engagement. While nine to 10 months is not a long time to serve as interim sheriff, “I think I can drive our department to a high level,” Ray added.

In a written statement, Fletcher said he and his colleagues “selected an interim sheriff who has demonstrated a commitment to reducing violent crime, improving the conditions in our jails, and embracing law enforcement best practices, along with a commitment to racial justice.”

Early in the meeting, Fletcher noted that each man “brings a lifetime of service to our community” and later credited them for handling the selection process with grace and dignity. 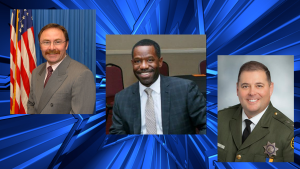 Ray was chosen from three candidates.

In a written statement, Supervisor Jim Desmond said public safety is the No. 1 responsibility of government and that he’s confident “Sheriff Ray will continue to keep San Diego County one of the safest in the country.”

“While all candidates were well-qualified this was the most seamless transition, until the voters choose their next sheriff,” Desmond added.

His colleague Terra Lawson-Remer said in a statement that it is critical “that the future leadership of our Sheriff’s Department take meaningful corrective actions to stop deaths in our jails,” and added that she’s committed to working with the department to advance policy reforms that protect public safety.

Barletta, Brock and Ray answered questions on how they would improve jail conditions, handle recruitment and training, boost outreach to the homeless and mentally ill, and work to rebuild community trust.

During a public comment period, social justice activists proposed that the state take over running county jails. A recent state audit of in- custody fatalities at the county’s jails criticized the Sheriff’s Department’s safety record, which recorded 185 deaths between 2006 and 2020 in the seven detention centers it oversees, among the highest totals in the state.

“We’re not asking for anything that hasn’t been done before,” said Yusef Miller of the Racial Justice Coalition of San Diego. “Just last week we lost two lives (in custody),” Miller added.