As Trump signs trade agreement with China, Speaker Pelosi signs Articles of Impeachment against him

The same day, Speaker Nancy Pelosi finally signed the Articles of Impeachment after withholding them from the Senate for four weeks. Pelosi said the occasion was “so sad, so tragic for our country” as she smiled and signed them with about a dozen different pens so she can hand them out as souvenirs.

After Pelosi and the Democrats claimed impeachment was so “urgent,” they refused to deliver the articles of impeachment to the Senate for four weeks because they wanted to pressure the Republican led Senate to adopt their terms for a trial.

Finally on January, 16, 2020, the Senate formally received the articles of impeachment. The enormous delay in the process has attracted tons of criticism from people on both sides of the political spectrum.

House Minority Leader Kevin McCarthy has pointed out that everyday Pelosi withheld the article of impeachment, was another day she was influencing the 2020 election. He explained that the delay benefits 2020 presidential candidate Joe Biden over Senator Warren and Senator Sanders because they will have to be off the campaign trail to participate in the Senate impeachment hearing.

Joe Biden, on the other hand, will be free to continue campaigning for the nomination.

Furthermore, McCarthy has pointed out the specific days that Speaker Pelosi has chosen to move forward with impeachment. On Fox News, he said, “every time this President is strengthening our nation – they’re sabotaging democracy.”

He specifically pointed out the day Pelosi announced impeachment, was the same day President Trump was at the United Nations meeting with world leaders.

On December 4th, 2019, President Trump was with NATO, the Democrats held their hearing with constitutional law professors. And on January 15, 2020, President Trump signed the historic trade deal with China, and Pelosi finally announced the impeachment managers and sent the articles of impeachment to the Senate.

.@GOPLeader: "Every time this President is strengthening our nation – they're sabotaging democracy."

We want to hear what our viewers thought about what our elected leaders in Washington D.C. are doing. If you want to share your opinion with us, please comment on our Facebook post below.

The New York Post published the following cover on Thursday to display the partisan divide Democrats have brought to the United States by impeaching President Trump on a partisan vote. 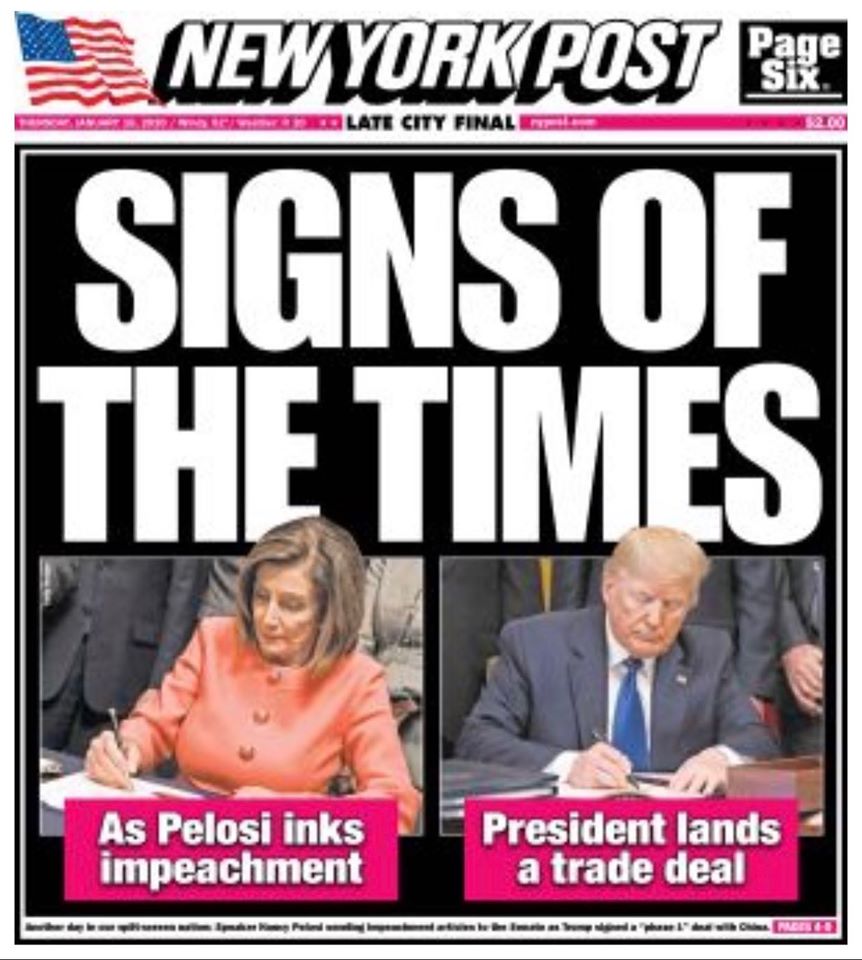