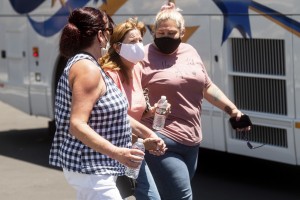 Women leave a gathering area for Santa Clara Valley Transportation Authority (VTA) workers and family members following a shooting at one of the agency’s rail yards on Wednesday, May 26, 2021, in San Jose, Calif. A Santa Clara County sheriff’s spokesman said a shooting at the rail yard left at least eight people, including the gunman, dead. (AP Photo/Noah Berger)

SAN JOSE, Calif. (AP) — Authorities have identified eight people killed by a gunman at a California railyard on Wednesday before the gunman took his own life.

They range in age from 29 to 63 years old and many are longtime employees of the transit agency where the shooting happened.

Authorities say the 57-year-old gunman at the San Jose railyard killed himself as law enforcement rushed in.

His ex-wife, Cecilia Nelms, says Cassidy would tell her that he wanted to kill people at work.

But she adds: “I never believed him, and it never happened. Until now.”