CHULA VISTA (KUSI) – Chula Vista Brewery is releasing a Pilsner for Memorial Day Weekend, called “Operation Overlord” Friday to give back to the Best Defense Foundation, founded by Donnie Edwards, NFL linebacker who gives back to Veterans and military families.

Operation Overlord was brewed to help raise awareness commemorating D-Day and help future generations gain an understanding of the sacrifices rendered in helping keep stories alive and passed on so we may all gain a further understanding and appreciation of our Heroes. 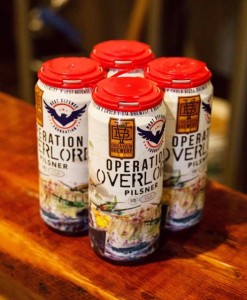 “It is really special to team up with Donnie and the Best Defense Foundation to brew a beer to be enjoyed with an appreciation for those of our Armed Forces who paid the ultimate for the very freedom to do said,” said James Hodges, Head  Brewer at Chula Vista Brewery.

Operation Overlord was the codename for the Battle of Normandy, the Allied operation that launched the successful invasion of German-occupied Western Europe during
World War II. The operation was launched on D-DAY June 6, 1944, with the Normandy landings.”

“Operation Overlord”, 5.5% Hoppy Pilsner – Clear and crisp with aromas of zesty citrus. The flavor is lightly floral with a classic pilsner finish. Brewed with German grains and American and New Zealand hops.

Padres re-open to 100% capacity at Petco Park on Thursday