LOS ANGELES (AP) — The 2019 BET Awards featured a number of contemporary pop and rap stars who are dominating the charts, from Cardi B to Lil Nas X. But the show belonged to artists viewed as icons in the black community, including singer Mary J. Blige, filmmaker Tyler Perry and the late rapper Nipsey Hussle.

Hussle, a respected and beloved community activist in South Los Angeles who was shot to death on March 31, posthumously earned the Humanitarian Award on Sunday night. His family, including his mother, father, grandmother, children and fiancée, actress Lauren London, accepted the honor on his behalf. 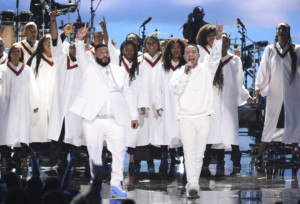 DJ Khaled, left, and John Legend perform during a tribute to late rapper Nipsey Hussle at the BET Awards on Sunday, June 23, 2019, at the Microsoft Theater in Los Angeles. (Photo by Chris Pizzello/Invision/AP)

“I just want to thank you guys for all the love and support, and the marathon continues again,” London said onstage at the Microsoft Theater in Los Angeles.

Blige, who earned the Lifetime Achievement Award, ran through her hits during a lengthy performance, which featured Lil Kim and Method Man. The R&B star went from “My Life” to “No More Drama” to “Just Fine,” when audience members turned the aisles into “Soul Train” lines as they showed their best dance moves while the Queen of Hip-Hop Soul sang onstage.

A list of winners at the 2019 BET Awards, which aired live Sunday from the Microsoft Theater in Los Angeles.

— Video of the year: Childish Gambino, “This Is America”

— Album of the year: Cardi B, “Invasion of Privacy”

— Sportswoman of the year: Serena Williams

— Sportsman of the year: Stephen Curry