Education Secretary Betsy DeVos on Wednesday defended a proposal to eliminate funding for the Special Olympics, pushing back against a storm of criticism from athletes, celebrities and politicians who rallied to support the organization.

DeVos became a target on social media after Democrats slammed her plan to remove the group’s funding as part of nearly $7 billion in budget cuts for next year. The Special Olympics received $17.6 million from the Education Department this year, roughly 10 percent of its overall revenue.

In a statement responding to criticism, DeVos said she “loves” the organization’s work and has “personally supported its mission.” But she also noted that it’s a private nonprofit that raises $100 million a year on its own. Ultimately, she argued, her agency can’t afford to continue backing it.

“There are dozens of worthy nonprofits that support students and adults with disabilities that don’t get a dime of federal grant money,” she said. “Given our current budget realities, the federal government cannot fund every worthy program, particularly ones that enjoy robust support from private donations.” 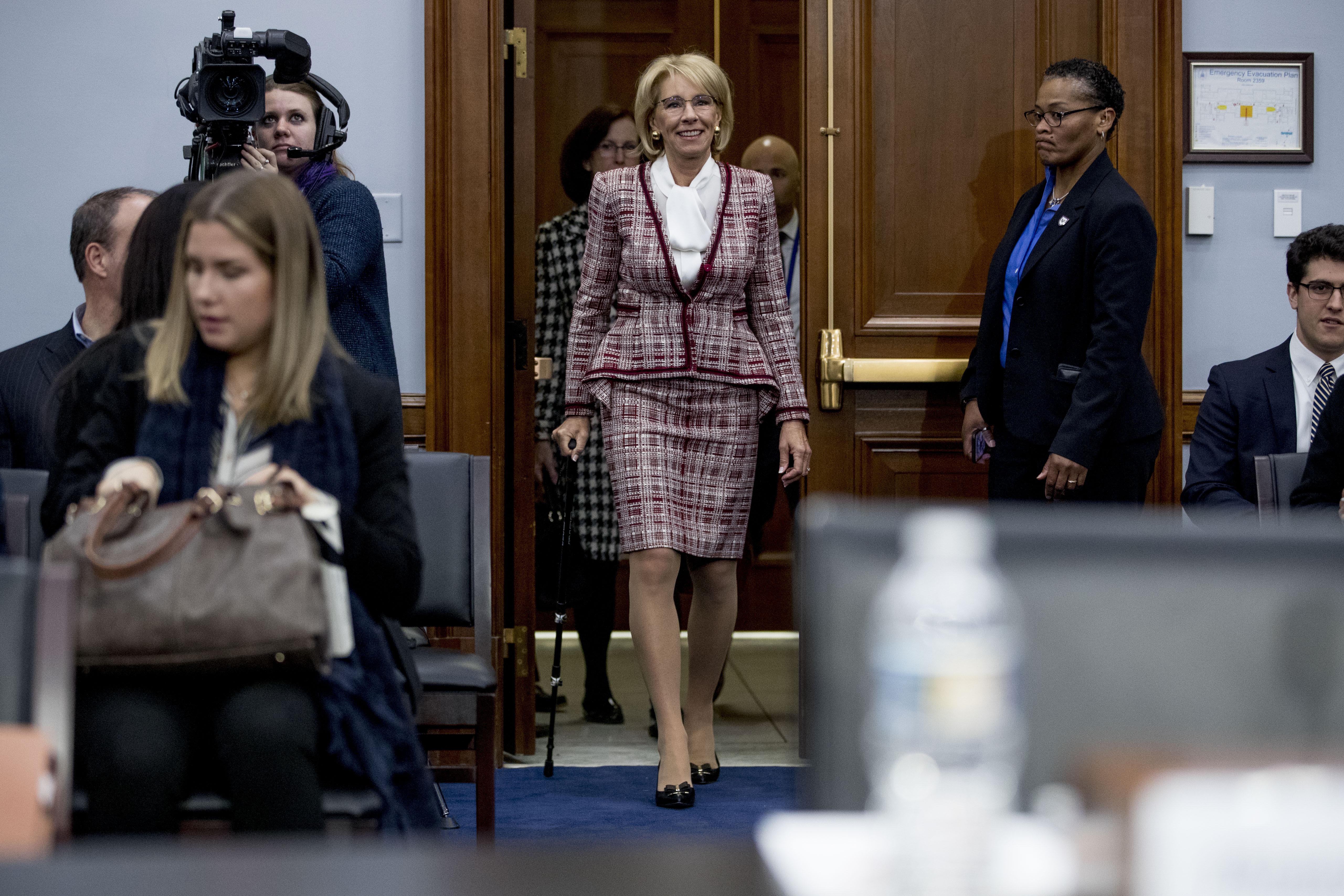 Special Olympics Chairman Tim Shriver on Wednesday pushed back against the proposed cut.

The Trump administration tried to eliminate Special Olympics funding in its previous budget proposal, too, but Congress ultimately increased funding for the group. Lawmakers indicated that the latest attempt will also fail.

“Our Department of Education appropriations bill will not cut funding for the program,” said Sen. Roy Blunt, R-Mo., chairman of the Senate subcommittee over the education budget. Blunt said he’s a “longtime supporter” of the group and recently attended its World Games.

DeVos is expected to present her budget to Blunt’s panel Thursday, just days after being grilled over it in the House. Democrats on a House subcommittee asked DeVos how she could cut Special Olympics funding while calling for a $60 million increase in charter school funding.

“Once again, I still can’t understand why you would go after disabled children in your budget. You’ve zeroed that out. It’s appalling,” Rep. Barbara Lee, D-Calif., said at the hearing.

DeVos told the panel that her department “had to make some difficult decisions,” adding that the Special Olympics is best supported by philanthropy.

Following the hearing, Twitter was alight with comments from parents, advocates and celebrities who slammed DeVos and urged her to rethink the proposal.

Joe Haden, who plays for the NFL’s Pittsburgh Steelers and works as an ambassador for the Special Olympics, said he was sickened by the cut. “This is so wrong on so many Levels!” he said on Twitter.

Former Ohio Gov. John Kasich, a Republican, called the proposal outrageous. Kasich, who also represented Ohio in the U.S. House, said that when he was on the budget committee, “these types of programs were off limits — for good reason.”

Others opposing DeVos included Julie Foudy , former captain of the U.S. women’s soccer team, and actress Marlee Matlin , who said the benefits of the Special Olympics are “immeasurable.”

Some Special Olympics athletes joined in to support the group, including Derek “Tank” Schottle, who posted a video that had been viewed more than 140,000 times by Wednesday.

“Win or lose, we’re all winners in our hearts,” he said. “What warms peoples’ hearts is we’re all humans, just like everybody else.”

The Special Olympics’ 2017 annual report, the latest available on its website, says the group received a total of $148 million in revenue that year, including $15.5 million from federal grants.

More than three quarters of the group’s revenue comes from individual and corporate contributions and other fundraising efforts.

DeVos’ budget places the Special Olympics funding among 29 programs up for elimination in 2020, arguing that they have achieved their purpose or that they are ineffective, don’t meet national needs or are better funded from other sources.

The proposal separately calls for $13.2 billion in federal grants awarded to states for special education, the same amount that was given this year.

In her statement, DeVos said it was “shameful” that the media and members of Congress “spun up falsehoods and fully misrepresented the facts.” She drew attention to the $13.2 billion in state grants, along with an additional $226 million for grants supporting teacher training and research to help students with disabilities.

“Make no mistake,” she added, “we are focused every day on raising expectations and improving outcomes for infants and toddlers, children and youth with disabilities, and are committed to confronting and addressing anything that stands in the way of their success.”

This isn’t the first time DeVos has run afoul of disability rights advocates.

Some were stunned by a 2017 Senate hearing in which DeVos, while being questioned about a federal law supporting students with disabilities, said it was “a matter that is best left to the states.” When asked if she was familiar with the federal law, she said she “may have confused it.”

DeVos again roiled advocates last December when she rescinded Obama-era guidance meant to protect racial minorities and students with disabilities from unwarranted discipline. In making the decision, DeVos said discipline decisions should be left to teachers and schools.

This article has been corrected to fix typographical errors in a statement from Tim Shriver that was provided by NBC.