Between sidelines and soft notes, officiating is half the battle for Bernard

SANTEE — The sun is out at Santana High School, and the crowd is gathered for lacrosse.
While the sea of parents and friends have their eyes of the ball and the students, no one’s paying attention to the man in black and white stripes, double knee braces, and a fun smile.
That is, until the whistle blows.
“White, two zero, slash, one minute.”
The groans come in like a funnel. Half the crowd upset. Half the crowd shrugging.
Just another day in the life of Bernard Battle.
“We’re doing our job, pissing off half the people 100 percent of the time,” Battle recalls from the comforts of his Ramona office.
“But as a musician, they usually always compliment you…even if you didn’t sound good. They say ‘Oh, you sounded wonderful!'” 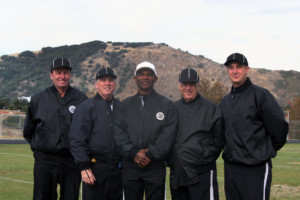 That’s new music to our ears. But not to the man that’s been playing around San Diego and the world for the past three decades.
“I had a paper route when I was in [middle school] and I bought my first organ,” Battle said, “I taught myself how to play it.”
From those southern roots Battle became a go to performer across the county. In 2019 alone he’s played with 17 bands. His record is 26. And his playing skills have attracted legends from Mary Wells, to The Supremes, and even a man with songs in the key of life.
“I didn’t play with Stevie Wonder, he played with us,” Battle recalled. “It was a benefit and he just sat in with our group.” 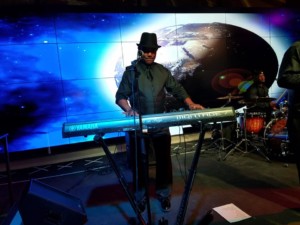 “One thing I do is learn how to play parts, Battle said. “I play horn parts, string parts…and bands like that. Some bands play tracks, but I can play live.”
Music became a shared profession with another role – officiating. First came baseball, after coaching his son’s T-ball team. Then came a 25 year football career. The last 10? He’s added a new venue – lacrosse.
“One of my fellow football officials said I had to try lacrosse…he said ‘Do you know what the best thing is? They don’t yell at you.'”
But yelling is just another sound, another tone in a life built by tunes.
“I’d like to be remembered as a person who did their best,” Battle said. “You never know who’s watching, so that’s how I handle myself on the field and the stage.” 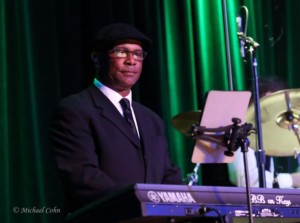