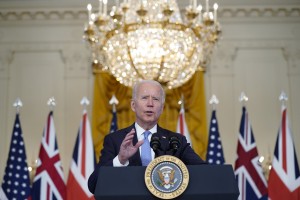 WASHINGTON (AP) — President Joe Biden has announced that the United States is forming a new Indo-Pacific security alliance with Britain and Australia that will allow for greater sharing of defense capabilities — including helping equip Australia with nuclear-powered submarines.

It’s a move that could deepen a growing chasm in U.S.-China relations.

The three announced they would quickly turn their attention to developing nuclear-powered submarines for Australia.