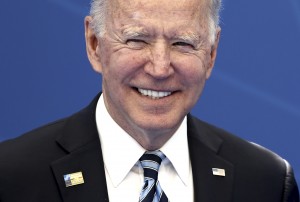 U.S. President Joe Biden arrives for a NATO summit at NATO headquarters in Brussels, Monday, June 14, 2021. U.S. President Joe Biden is taking part in his first NATO summit, where the 30-nation alliance hopes to reaffirm its unity and discuss increasingly tense relations with China and Russia, as the organization pulls its troops out after 18 years in Afghanistan. (Kenzo Tribouillard, Pool via AP)

The president has sought to gather support for a more unified approach to Russia prior to his Wednesday summit with President Vladimir Putin.

But the U.S.-EU relationship is not without tension.

Biden will meet with European Union officials at a moment when the continent’s leaders are becoming impatient that the American president has not yet addressed his predecessor Donald Trump’s 2018 decision to impose import taxes on foreign steel and aluminum.