WASHINGTON (AP) — President Joe Biden has signed legislation Thursday establishing a new federal holiday commemorating the end of slavery, saying he believes it will go down as one of the greatest honors he has as president. 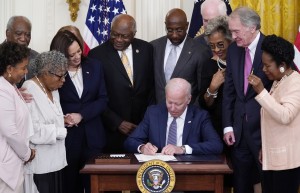 Biden signed into law a bill to make Juneteenth, or June 19, the 12th federal holiday.

The U.S. government announced Thursday that most federal government employees will observe the new holiday Friday because June 19 falls on Saturday this year.

While some say that while they appreciate the recognition at a time of racial reckoning in America, more is needed to change policies that disadvantage too many of their brethren.

Juneteenth commemorates June 19, 1865, when Union soldiers brought the news of freedom to enslaved Black people in Galveston, Texas — two months after the Confederacy had surrendered.

Group of residents, business owners campaign for the Navy to rebuild a suitable facility for NAVWAR