SAN DIEGO (KUSI) – A 3-year-old Lab/Shepherd mix whose former owners had removed his eyes instead of treating an eye infection and then relinquished him is now available for adoption at Helen Woodward Animal Center.

Louis’ journey has touched the hearts of animal-lovers across the globe who have been calling, emailing, donating, filling out adoption applications and offering services to help Louis adapt to his new life, according to Public Relations Director Jessica Gercke.

Medical checks, however, reveal a broken leg that was not treated, and formerly, severely infected eyes that were eventually removed.  Louis’ leg has received surgery and he is adapting to a life without sight, but both conditions reveal a past life of neglect and extreme mistreatment. 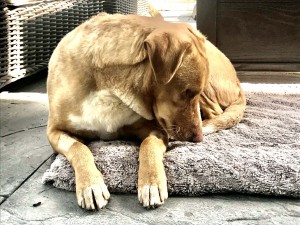 Helen Woodward Animal Center is seeking a local adopter to reduce the stress of Louis’ transition into his new home, and so that the Center can provide his new family in-home training, for a special needs pup, by Center Trainer, Rob Kuty of San Diego Pet Training.

“We are amazed and so touched by the response and the donations,” stated Helen Woodward Animal Center VP of Development Renee Resko.  “Louis is just one of many animals we’ve seen neglected and mistreated and each one breaks our hearts.  The fact that Louis’ story is getting so much attention means that more people will see the necessity of proper pet medical care and the responsibility pet-owners take on when they bring home a furry family member.”