MISSION BAY (KUSI) – Bonita Cove is among the most popular areas of a public aquatic park unlike any in the nation, including it’s size.  Last year, Mayor Kevin Faulconer announced over $40 million in projects for Mission Bay Park.  They include $3.4 million in needed improvement to the cove’s playground area.

They involve the playground itself, the nearby restroom building, a new shade structure and sidewalks and pedestrian curb ramps to meet the standards of the Americans with Disabilities Act.   Enhanced security lighting is also included.

At a groundbreaking ceremony, the Mayor said, “Think about how special Mission Bay Park is, not just to the city, but to the region.  Today we take a major step forward in improving it for future generations, including kids.” 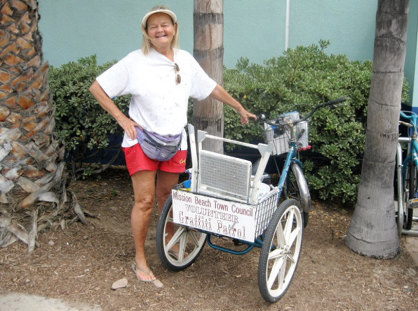 But it was the size of a gathering for a groundbreaking that should also be noted.    And the fact that that many of the people, Mission Beach residents and activists,  were wearing red.  Red was Maruta Gardner’s favorite color.  Maruta was a much beloved figure in Mission Beach, not just for her friendship to so many, but for her daily activism in beautifying her neighborhood, including graffiti removal.

Three years ago, an entire community felt the blow when Gardner was killed by an impaired driver while painting out graffiti in South Mission Beach.  When the makeover here is completed, the playground will bear her name.

An upgrade here was something Maruta was pushing for at the time of her death. Maruta’s husband Willie, wearing red, was prominent among the crowd.

Mayor announcing improvements to Bonita Cove, many people on hand because the new playground will carry the name of the late and much beloved Maruta Gardner pic.twitter.com/yTk6KSNxwM