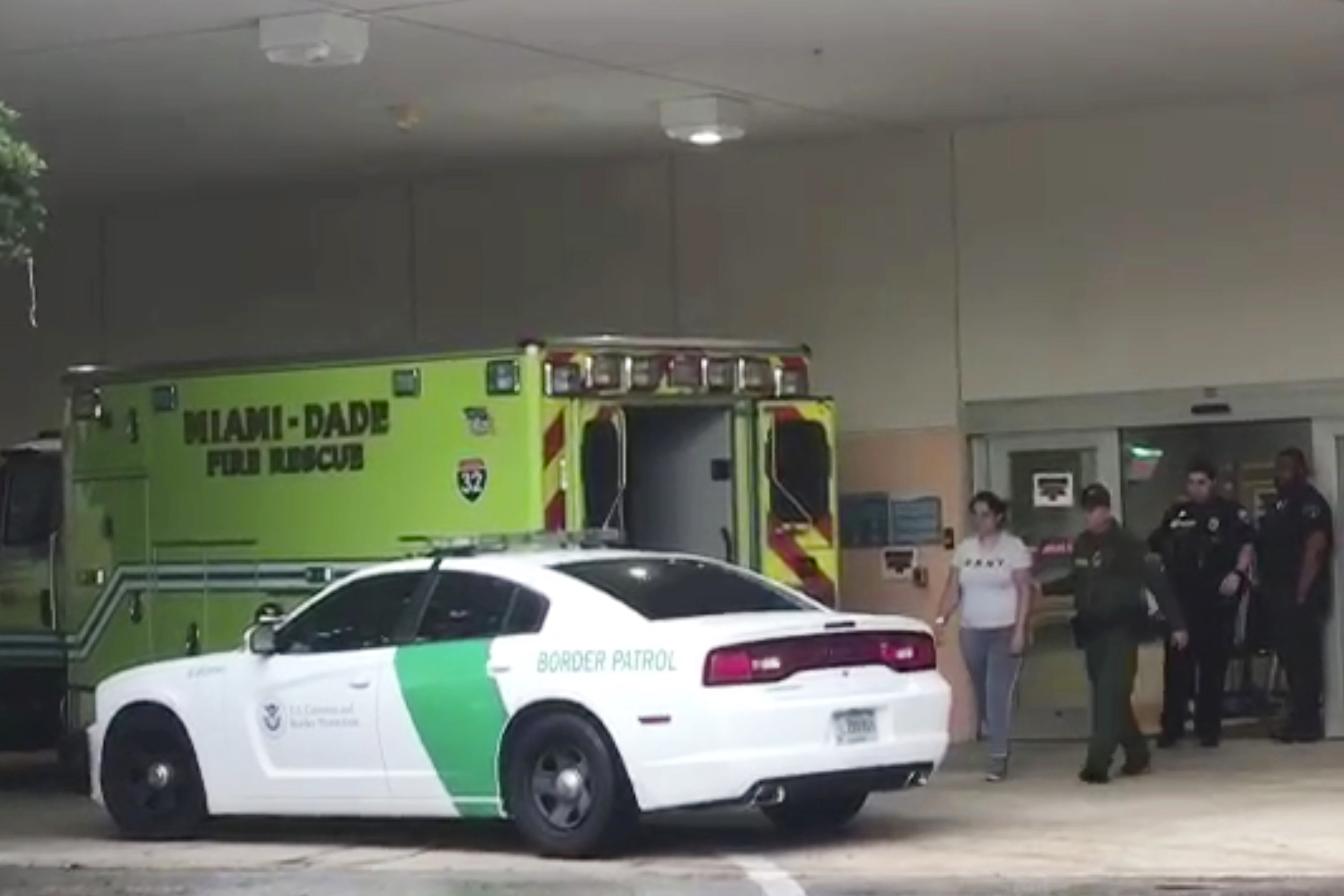 In this image taken from video provided by the Florida Immigrant Coalition, a border patrol agents escorts a woman to a patrol car Sunday, Oct. 13, 2019, at Aventura Hospital in Aventura, Fla. The woman had been detained by border patrol agents, when she fell ill. The agent took her to the hospital emergency room for treatment. The presence of immigration authorities is becoming increasingly common at health care facilities around the country, and hospitals are struggling with where to draw the line to protect patients’ rights amid rising immigration enforcement in the Trump administration. (Florida Immigrant Coalition via AP)

MIAMI (AP) — An armed Border Patrol agent roamed the hallways of an emergency room in Miami on a recent day as nurses wheeled stretchers and medical carts through the hospital and families waited for physicians to treat their loved ones.

The agent in the olive-green uniform freely stepped in and out of the room where a woman was taken by ambulance after throwing up and fainting while being detained on an immigration violation, according to advocates who witnessed the scene.

The presence of immigration authorities is becoming increasingly common at health care facilities around the country, and hospitals are struggling with where to draw the line to protect patients’ rights amid rising immigration enforcement in the Trump administration.

Some doctors say this increased presence could undermine public health in cities with large immigrant populations, frightening patients who need care and prompting them to avoid hospitals.

Normally, Immigration and Customs Enforcement officers and Border Patrol agents enter hospitals when detainees require emergency medical services or specialized care. In many cases, agents escort sick immigrants to the hospital after apprehending them at the border. In some instances, they have detained them after leaving a hospital.

In 2017, Border Patrol agents followed a 10-year-old immigrant with cerebral palsy to a Texas hospital and took her into custody after the surgery. She had been brought to the U.S. from Mexico when she was a toddler.

Doctors, lawyers and family members have complained about immigrants being shackled in hospitals and the intrusive presence of uniformed agents in exam rooms during treatment and discussions with physicians about medical care.

The American Medical Association Journal of Ethics devoted its entire January issue to medical care for immigrants who are in the country illegally, including a discussion of whether medical facilities should declare themselves “sanctuary hospitals,” similar to sanctuary cities.

“Our patients should not fear that entering a hospital will result in arrests or deportation. In medical facilities, patients and families should be focused on recovery and their health, not the ramifications of their immigration status,” the association said in a statement.

But Dr. Elisabeth Poorman, a primary care physician at the University of Washington in Seattle, says facilities need to constantly train staff on how to interact with law enforcement and immigrant patients in these situations.

“The ground is constantly shifting. I can tell the patient I am committed to your safety, but in the current administration we cannot tell everyone that they are 100% safe,” she said.

Earlier this year, the agency that oversees Border Patrol said its agents averaged 69 trips to the hospital each day across the country. In the first half of the year, the federal government said Border Patrol agents had spent about 153,000 hours monitoring detained people at hospitals, as more families and children were crossing the border from Mexico. That’s the equivalent of about 20,000 8-hour shifts spent at hospitals.

Hospitals, schools and places of worship are considered “sensitive locations” by a government policy and are generally free from immigration enforcement. But the rule is discretionary and ambiguous when an enforcement action begins before a trip to a hospital or when an immigrant is already in custody.

Thomas Kennedy, policy director of the Florida Immigrant Coalition, says his organization received a call on Sunday alerting them of the detention and hospitalization of a woman in the suburb of Aventura. The woman’s identity was not disclosed by the group, saying the family asked for privacy.

The woman and her ex-husband were driving with their two children, who are U.S. citizens, after a day at Haulover Beach on Sunday when a Border Patrol car flashed its lights to pull them over. Border Patrol conducts operations within 100 miles (160 kilometers) of a U.S. land or coastal border, and Florida lies entirely within this zone.

Kennedy said the agents told her she had to go with them, and shortly after, she threw up and fainted. The agents then called for an ambulance.

Keith Smith, a spokesman for the U.S. Customs and Border Protection agency, said the woman was detained for being “illegally present” in the United States, and clarified Border Patrol does not conduct any enforcement operations in hospitals in Florida.

“However, agents will transport persons in custody and remain with them until medically treated and cleared,” he said in an email. Smith added agents were following national standards when escorting the woman to the hospital.

In what Kennedy says is a recorded exchange between him and the Border Patrol agent with their faces off camera, Kennedy is heard asking the agent to show a warrant. The agent’s response: I don’t need one.

“It is a little unorthodox to have a Border Patrol officer outside of her room and going in and out while she is receiving medical treatment,” Kennedy said. “This type of stuff creates fear. It prevents undocumented immigrants from seeking care.”

Kennedy said he confronted the staff at Aventura Hospital and Medical Care, but employees told him they didn’t want to get involved and were simply providing care. The hospital, which is part of the Nashville-based health care giant HCA, Inc., did not respond to questions regarding cooperation with immigration authorities.

The immigration agency said its agents must document the hospitalization providing a discharge summary, treatment plans and prescribed medications from any medical evaluation.

Health care lawyers and medical associations say providers generally should not allow law enforcement unrestricted access to treatment areas, to comply with the federal Health Insurance Portability and Accountability Act, known as HIPAA. The law protects against improper disclosure of confidential information that may result from offering such access.

A spokesman for NYC Health and Hospitals, which operates the public hospitals and clinics, said that when patients show up in custody of immigration enforcement, officers would be posted outside the treatment room, the same way it happens with police officers.

But hospitals have yet to come up with a universal set of policies on how medical staff and physicians interact with immigration authorities. Dr. Poorman said she hopes that hospitals start doing more on the issue.

“There is a lack of courage from the hospital systems to really acknowledge what is happening to our patients,” she said.