SHELTER VALLEY (KUSI) – Containment increased to 55% today on the 5,184-acre Southern Fire in Shelter Valley east of Julian and evacuation orders were lifted. 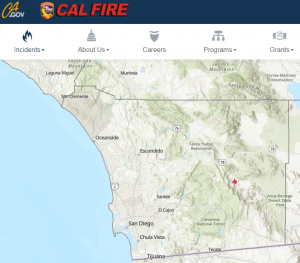 The brush fire was reported about 5:15 p.m. Saturday off the 14900 block of Great Southern Overland Stage Route. Within 90 minutes, it had spread to about 1,200 acres, leveled three structures and forced the evacuation of roughly 500 residents from Butterfield Ranch Campground to Agua Caliente Campground.

Overnight, the American Red Cross helped 32 evacuees with meals and emergency lodging in hotel rooms. By Sunday afternoon, that number had increased to 70.

No injuries have been reported.

The San Diego Humane Society supported the county Department of Animal Services with evacuations of pets and livestock — including rabbits, goats, a donkey, horses and chickens — on Saturday night.

Evacuation orders for Butterfield Ranch and the surrounding community had been lifted as of Monday afternoon, along with road closures along county Highway S-2.