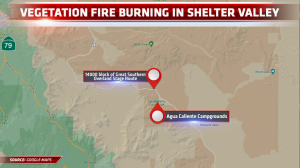 Containment is at zero percent, among strong overnight winds of 40 to 60 miles per hour. Firefighters continue to work, building a containment line, the San Diego Count Fire Department reported.

The fire was reported by Cal Fire San Diego at 5:15 p.m. Saturday on the Great Southern Overland. 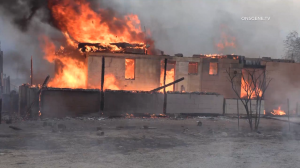 Motorists first called the California Highway Patrol to report smoke in the area at 4:06 p.m. and the agency reported the address as 14925 Great Southern Overland Stage.

By 6:38 p.m., the agency tweeted that the fire had spread to about 1,200 acres, three structures were destroyed and roughly 500 residents were evacuated from the Butterfield Ranch Campground to Agua Caliente.

At 7:45 p.m., Cal Fire reported the acreage was reduced to 800 acres and there was cleared vegetation around 5% of the fire.

The American Red Cross sent volunteers to set up a temporary evacuation point at the Agua Caliente Campgrounds at 39545 Great Southern Overland.