MILWAUKEE (AP) — Giannis Antetokounmpo capped one of the greatest NBA Finals ever as the Milwaukee Bucks won their first championship in 50 years. 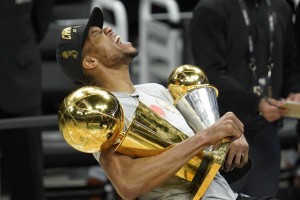 He was an easy choice after collecting 50 points, 14 rebounds and five blocks in a 105-98 Game 6 victory over Phoenix that clinched the championship for the Bucks.

It was the third game of this series with at least 40 points and 10 rebounds for Antetokounmpo. It was a dominant performance in just his first appearance in the finals.

He did all that while dealing with a hyperextended left knee that prevented him from playing in the last two games of the Eastern Conference finals against the Atlanta Hawks.

He has also won two regular-season MVP awards and he is just 26 years old.