Bystander caught in crossfire near Belmont Park in Mission Beach 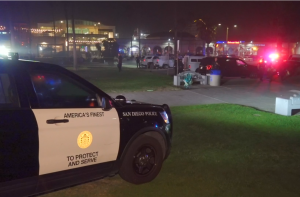 SAN DIEGO (KUSI) – An investigation was continuing Tuesday into a shooting that wounded a 61-year-old bystander near the historic Belmont Park amusement park in Mission Bay.

Four males got into an argument east of the bathrooms and one, described as being in his late teens, started running southbound through the parking lot, Buttle said. A man in his 20s from the group shot at him but missed, and hit the victim — a woman whose name was withheld — in the shoulder area.

The intended target fired back, according to the officer, who said two vehicles sustained bullet holes and 10 shell casings were found at the scene.

The woman was taken by paramedics to a hospital for treatment of wounds that were not believed to be life-threatening, Buttle said.