SAN DIEGO (KUSI) – San Diego’s Cabrillo National Monument was closed Saturday as a result of the partial federal government shutdown that went into effect at midnight when the Senate and House of Representatives failed to reach an agreement on President Donald Trump’s proposed border wall. The monument’s website said it was shuttered Saturday “for the safety of visitors and park resources” due to the lapse in federal funds, and the site wouldn’t be updated during the shutdown. The Cleveland National Forest’s website also said the USDA wouldn’t actively update the site during the shutdown, but there was no information on any portion of the forest being closed.

The status of many National Parks is unclear. Workers were to be furloughed, but the parks themselves were expected to remain accessible for the most part. Congress approved funds for about three-quarters of the federal government in September, but the budgets for the remaining portions of the government had a Dec. 21 deadline for funding to pass. The House of Representatives on Thursday passed a stopgap funding bill with $5 billion for a wall on the U.S.-Mexico border. The Senate and House both adjourned Friday night without reaching a spending deal. 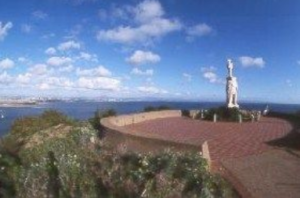 The Senate again adjourned without a deal Saturday afternoon, ensuring the shutdown will continue at least through Thursday. Many workers were off during the Christmas holiday anyway, meaning the full effects of the shutdown won’t likely be felt unless it goes on longer. The departments of Interior, Homeland Security, State, Agriculture, Housing and Urban Development, Transportation, Commerce and Justice were all affected by the partial shutdown.

Workers such as Border Patrol agents and Transportation Security Administration workers were expected to continue working. The U.S. Postal Service was unaffected by the shutdown and will continue to deliver mail.