Gov. Jerry Brown a measure that supporters say would make California the first state to bar full-service restaurants from giving out single-use plastic straws unless customers request them. It wouldn’t ban straws as some cities have in a bid to combat waste.

The bill would not allow dine-in restaurants to provide straws to their customers, unless the customer requests a straw.

According to the Los Angeles Times, the California Coastal Commission recorded about 835,000 straws and stirrers were picked up during pollution reduction activities between 1988 and 2014.

According to Technomic, about 172 million straws are used each day by Americans.

Even though straws make up about 0.02% of the plastic that ends up in the ocean, Governor Brown is expected to sign the bill as early as Friday.

The California measure, which passed the Assembly 45-20, is part of a larger trend in cities across the United States that are banning plastic bags, plastic utensils and other plastic goods to reduce ocean pollution.

Democratic California Assemblyman Ian Calderon described his measure, AB1884, as a small step toward reducing plastic use and fighting pollution. It would apply only to full-service restaurants, not fast food establishments.

Restaurants would be warned for first and second violations and fined $25 per day for subsequent infractions, with an annual fine limit of $300.

Calderon says the measure would not be overly burdensome on businesses. The restaurant industry didn’t oppose it. 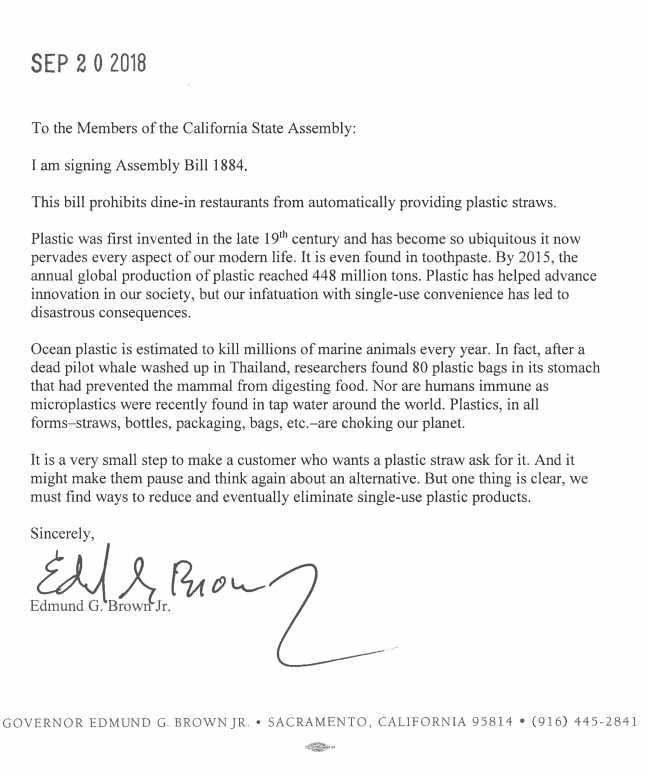