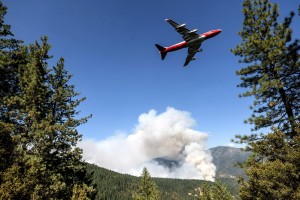 FILE – In this Sept. 17, 2020, file photo, an air tanker prepares to drop retardant while battling the August Complex Fire in the Mendocino National Forest, Calif. Rain showers fell Thursday, Sept. 24, 2020, on the northwestern edges of fire-ravaged California but forecasters warned residents to not be fooled: a new round of hot, dry and windy weather is expected by the weekend. (AP Photo/Noah Berger, File)

SAN FRANCISCO (AP) — Firefighters in northern and central California are bracing Saturday for hot, dry and windy weather that may fan the flames of several major wildfires or ignite new ones.

Efforts to corral more than two dozen wildfires across the state have benefited recently from low winds and with moist air flowing inland from the Pacific. But forecasters said that weather pattern will reverse during the weekend as a ridge of high pressure boosts temperatures and generates gusts flowing from the interior to the coast.

In northern and central areas of the state, the strongest winds are forecast to occur from Saturday night into Sunday morning, followed by another burst Sunday night into Monday.

The Pacific Gas & Electric utility was tracking the forecasts to determine if it would be necessary to shut off power to areas where gusts could damage the company’s equipment or hurl debris into lines that can ignite flammable vegetation.

The shutoffs could potentially affect 97,000 customers in 16 counties starting Saturday evening through Monday.

PG&E equipment has sparked large wildfires, including the deadly 2018 fire that destroyed much of the Sierra foothills town of Paradise and killed 85 people.

That’s the same area where firefighters are currently battling the state’s largest wildfire. The cluster of blazes called the August Complex is burning near the small communities of Post Mountain and Trinity Pines, about 200 miles (322 kilometers) northwest of Sacramento.

Numerous studies in recent years have linked bigger U.S. wildfires to global warming from the burning of coal, oil and gas, especially because climate change has made California much drier. A drier California means plants are more flammable.

The U.S. Forest Service’s Pacific Southwest Region announced Friday that it is extending the closure of all nine national forests in California because of concerns including fire conditions and critical limitations on firefighting resources.

A firefighter was killed and another was injured on Aug. 31 while working on the blaze. Diana Jones, a volunteer firefighter from Texas, was among 26 people who have died since more than two dozen major wildfires broke out across the state last month.

In Southern California, authorities lifted most evacuation orders around the enormous Bobcat Fire burning for nearly three weeks in mountains northeast of Los Angeles. The blaze has destroyed 124 structures and damaged an additional 36, according to preliminary estimates from Los Angeles County.