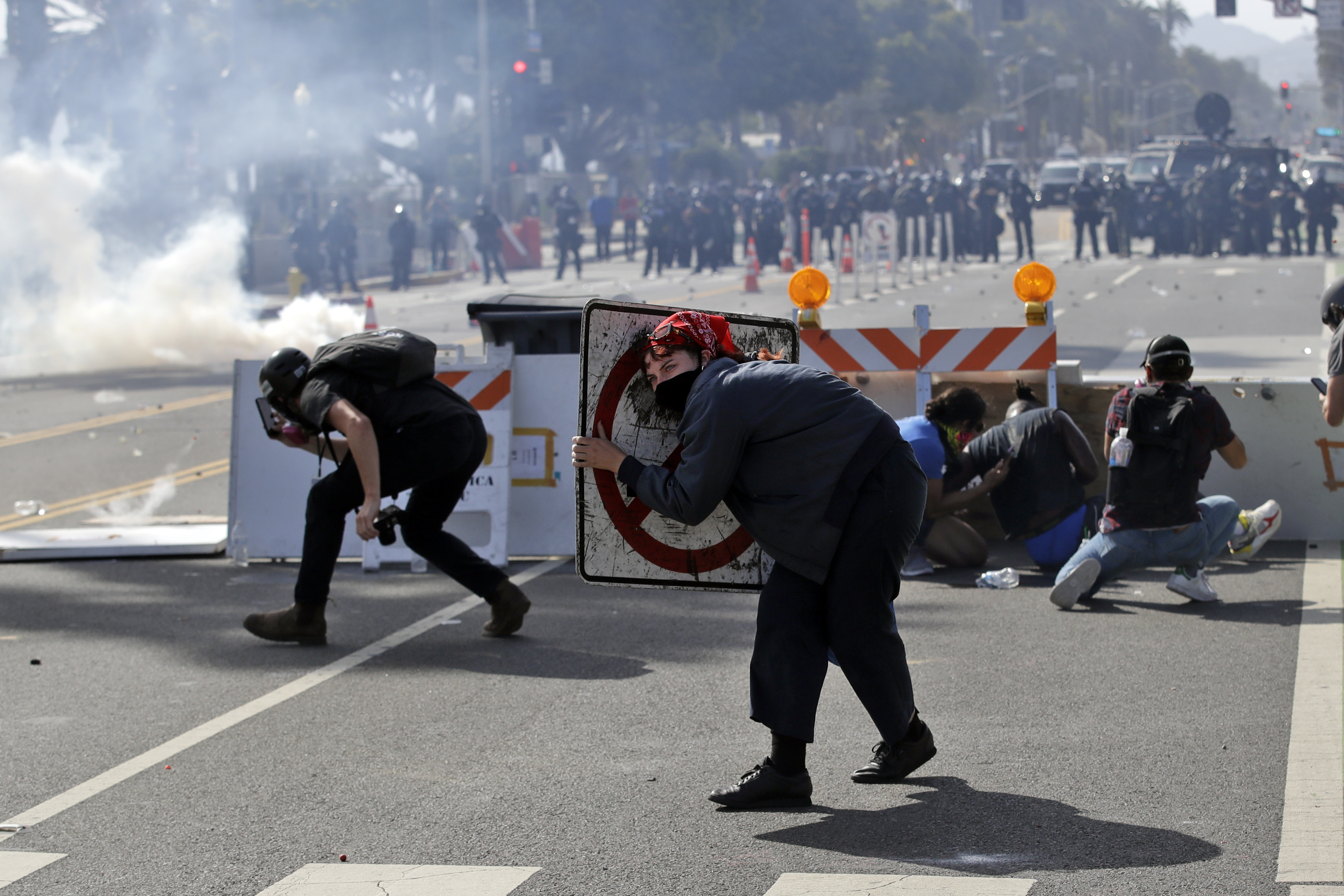 FILE – In this Sunday, May 31, 2020 file photo a demonstrator tries to shield herself from tear gas with a street sign during clashes with police, in Santa Monica, Calif. during unrest and protests over the death of George Floyd, a black man who was in police custody in Minneapolis. California lawmakers are pushing to enact nearly a dozen policing reform laws driven by nationwide outrage and protests after Floyd’s death in May. (AP Photo/Marcio Jose Sanchez,File)

SACRAMENTO, Calif. (AP) — California lawmakers are pushing to enact nearly a dozen policing reform laws driven by nationwide outrage and protests after George Floyd’s death in Minneapolis in May. Lawmakers have until Aug. 31 to approve and send legislation to Democratic Gov. Gavin Newsom.

The California Police Chiefs Association initially called for banning the carotid and chokeholds, but withdrew its support after it said Gipson broadened his bill “to include additional restrictions that are vague and subjective.”

AB1022 by Assemblyman Chris Holden, D-Pasadena, would require law enforcement officers to immediately intercede and report what they believe to be the use of excessive force.

Officers’ careers would end if they are found to have used excessive force resulting in serious injury or death, or failed to stop the overuse of force by another officer. Officers who don’t intercede could be criminally charged as accessories to any crimes committed by those who use excessive force.

Associations representing police officers say a new state law already gives officers a duty to intercede. They say more training and strong policies are better than criminalizing officers who may only have passing involvement.

AB767 by Assemblyman Tim Grayson, D-Concord, would allow even criminal suspects and their survivors to apply for victims’ compensation if they were injured or killed by police use of excessive force. The first-in-the-nation proposal supported by State Treasurer Betty Yee, who sits on the California Victim Compensation Board, would also let the board consider documents beyond police reports that proponents said can be biased.

Advocates include the sisters of 22-year-old Sean Monterrosa, who was killed June 2 in Vallejo, near San Francisco, when police suspected him of stealing from a pharmacy on the night of a national protests over Floyd’s death. Police say what they thought was a gun turned out to be a hammer.

AB66 by Assemblywoman Lorena Gonzalez, D-San Diego, would respond to perceived police overreactions during recent protests by limiting the use of tear gas, pepper spray, rubber bullets and other projectiles against demonstrators.

SB629 by Sen. Mike McGuire, D-Healdsburg, would protect the right of journalists to cover protests without interference from police.

SB480 would bar law enforcement officials from wearing military-style uniforms. Sen. Bob Archuleta, D-Pico Rivera, said that can make it difficult for civilians to distinguish officers from members of the National Guard. He said it can also sow fear and confusion, as when federal officers wore camouflage while confronting protesters in Portland, Oregon.

AB1506 by Assemblyman Kevin McCarty, D-Sacramento, would create a new division within the state Department of Justice that, if requested by a local law enforcement agency, would investigate an officer-involved shooting or other use of force that kills a civilian. The department could also prosecute any officer it found had violated state law.

SB776 by Sen. Nancy Skinner, D-Berkeley, would expand on a 2019 law that lifted some of the nation’s most secretive police records by requiring public access to disciplinary records involving investigations into officer shootings, use-of-force incidents and incidents involving officer misconduct.

It would add records of discipline against officers accused of racist or discriminatory actions, or those who have a history of wrongful arrests or searches, among others. Investigations would be completed even if officers resign. Records fees would be limited and fines imposed on agencies that don’t comply.

Numerous law enforcement organizations say the bill would remove a requirement that only sustained complaints be made public.

SB731 by Sen. Steven Bradford, D-Gardena, would allow the state Department of Justice to revoke the certification of officers if they are fired for misconduct or convicted of certain crimes, to prevent them from getting new law enforcement jobs elsewhere.

The California Police Chiefs Association, which initially supported the idea, now says the legislation “is overly complex” and would remove immunity protections for all public employees.

SB203, also by Bradford, would would bar those who are 17 years old or younger from being questioned by police or waiving their rights until they have a chance to consult with an attorney. California currently applies those restrictions to youths 15 years or younger.