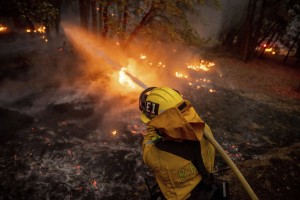 A firefighter hoses down flames from the Dixie Fire in Genesee, Calif., on Saturday, Aug. 21, 2021. (AP Photo/Ethan Swope)

MATHER, Calif. (AP) — More than 13,500 firefighters are working to contain a dozen large California wildfires that have destroyed hundreds of homes and forced thousands of people to flee.

The head of the California Office of Emergency services said Monday that after an extensive review of fire damage, Gov. Gavin Newsom has requested a presidential major disaster declaration for eight counties.

Officials also say the Caldor Fire southwest of Lake Tahoe is now the nation’s number one priority for firefighting resources and efforts are focused on keeping it out of the Tahoe basin.

To the north, containment of 1,130-square-mile Dixie Fire has increased to 40%.