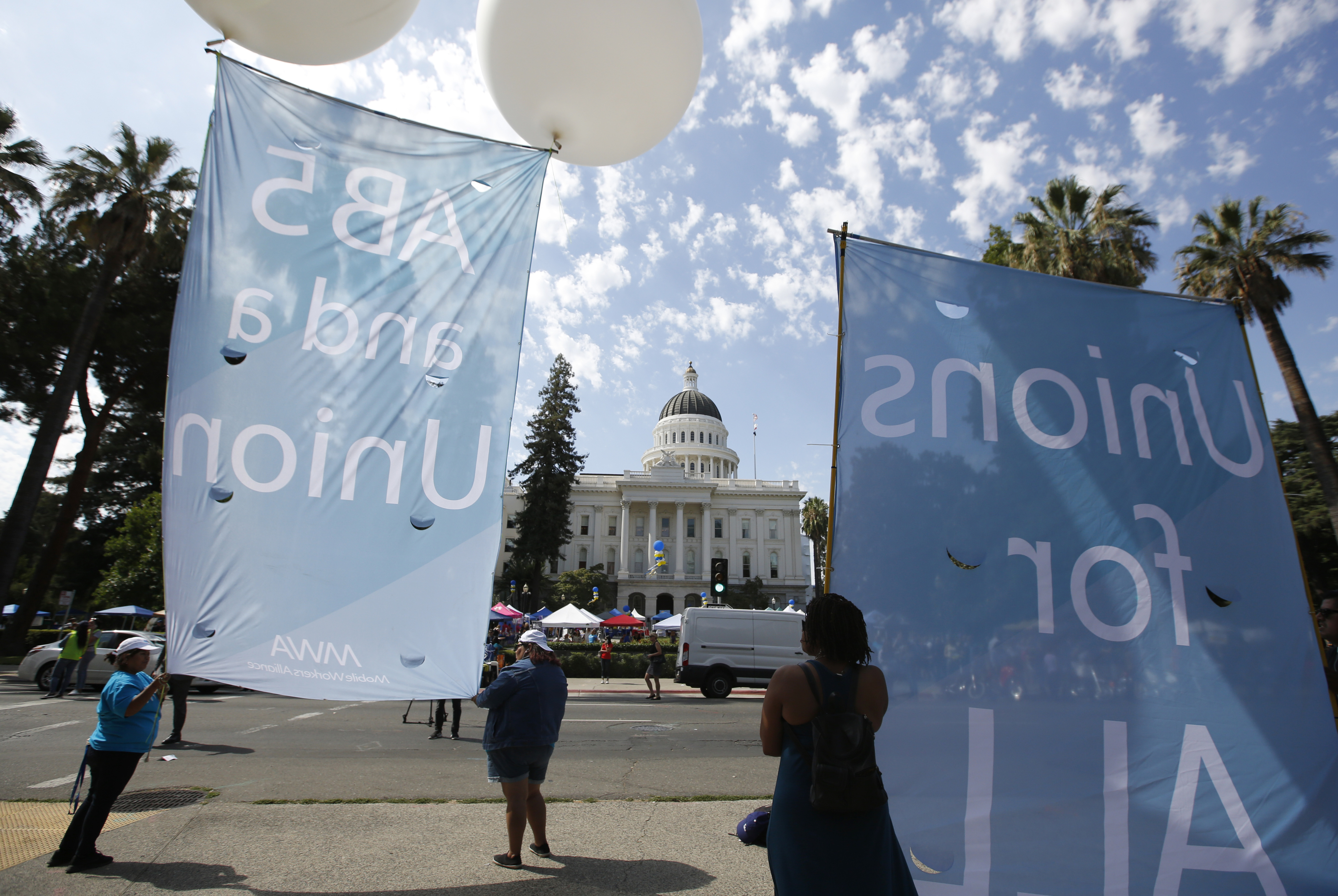 File -Supporters of a measure to limit when companies can label workers as independent contractors display banners in support of the bill during a rally at the Capitol in Sacramento, Calif., Wednesday, Aug. 28, 2019. California lawmakers on Monday, Aug. 31, 2020, were preparing to exempt about two-dozen more professions from a landmark labor law designed to treat more people like employees instead of contractors. (AP Photo/Rich Pedroncelli, File)

SACRAMENTO, Calif. (AP) — California lawmakers on Monday OK’d exemptions to about two-dozen more professions from a landmark labor law designed to treat more people like employees instead of contractors.

Among other things, the legislation would end what critics had said were unworkable limits on services provided by freelance still photographers, photojournalists, freelance writers, editors, and newspaper cartoonists, with certain restrictions to make sure they are not replacing current employees.

Lawmakers separately approved giving newspapers one more year before they have to start treating newspaper carriers as employees.

The law that took effect this year was primarily aimed at ride-hailing giants Uber and Lyft, which are fighting the new requirements in court and with a measure on the November ballot.

Unlike contractors, workers who are deemed employees are entitled to the minimum wage and benefits including overtime, sick leave and expense reimbursement.

But numerous professions have objected, saying that they were ensnared in a definition they said could end their livelihood.

The author of what became widely known as AB5, Democratic Assemblywoman Lorena Gonzalez of San Diego, said she worked for the last year to decide what additional jobs should be exempted from a law that critics said puts the state in the position of picking winners and losers.

The measure cleared the Senate on a 39-0 vote and passed the Assembly on a 66-0 vote. It would take effect immediately if Gov. Gavin Newsom signs it into law.

She also added those engaged in consulting services or animal services, along with landscape architects and professional foresters.

The measure passed the state Senate without a dissenting vote after Democrats who control the Legislature rejected multiple amendments from Republicans that sought to provide even more exemptions to the law.

“This is one of the most disastrous pieces of legislation we could have ever put forward and that the governor could have ever signed,” said GOP Sen. Melissa Melendez. “It has ruined thousands of lives and livelihoods and I am just so disheartened and disappointed that we couldn’t come together on this particular issue and give people some relief.”

Meanwhile, Gonzalez opposed a separate bill extending a one-year exemption for newspaper companies that has let them continue to treat newspaper delivery people as contractors.

The bill by Democratic Assemblywoman Blanca Rubio of Baldwin Park would extend the exemption until January 1, 2022.

Newspaper companies have said treating carriers as employees would drive up costs and accelerate the decline of printed newspapers.

“I can never condone or support an unsustainable business model that operates at the expense of low wage workers,” Gonzalez said, her voice cracking. “They have no lobby, they have no union … They’re just trying to get by.”

Her fellow Democrats — Rubio and Assemblyman Al Muratsuchi of Torrance — countered that small ethnic newspapers are among the hardest hit.

“Their ad revenues have dropped dramatically” because of the coronavirus pandemic, Muratsuchi said, citing examples from his district. “They’re struggling to survive.”

The Assembly sent the bill to Newsom on a 60-2 vote.