California lawmakers seek to remove ‘he’ from state laws

SACRAMENTO, Calif. (AP) — The California Legislature has passed a bill to make sure state laws don’t refer to elected public officials as men.

Lawmakers also passed a bill on Thursday that allows for people to be listed as nonbinary on death certificates. California has been steadily updating its laws in recent years to include gender-neutral language. 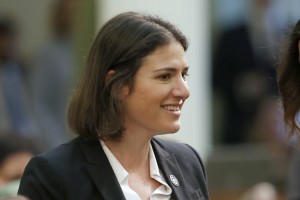 FILE – In this Jan. 23, 2020, file photo, Assemblywoman Rebecca Bauer-Kahan, D-Orinda, smiles at the Capitol in Sacramento, Calif. On Thursday, June 24, 2021, the state legislature approved two measures authored by Bauer-Kahan, that will change how the state refers to gender in official documents. One bill would remove gendered terms from laws governing public officials and another would allow “non- binary” to be listed on death certificates. The bills now go to Gov. Gavin Newsom’s desk. (AP Photo/Rich Pedroncelli, File)

A bill by Sen. John Laird would do the same for certain state agencies, including the California Highway Patrol.