Larson emphasized that elected officials were given their positions of power by citizens and thus, need to listen to the needs of their constituents.

This past week, Gov. Newsom announced that several California counties would be lifting up into the red tier, which allows indoor dining at 25%.

San Diego County, and many other counties in the surrounding region, did not make the cut.

Counties moving into the red tier must meet a number of requirements, one of them being a case rate of seven per 100,000 residents for two consecutive weeks. 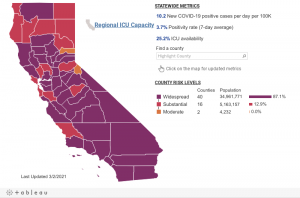 Another requirement to enter the red tier is a rigorous testing rate.

The state’s average test rate is 346 per capita.

“I think we’re all hearing now the practicality of people starting to realize that enough is enough. We’ll do the protocols, but you have to get the economy going and flourishing at a full level that helps everybody,” Larson added.