California to apologize for internment of Japanese Americans 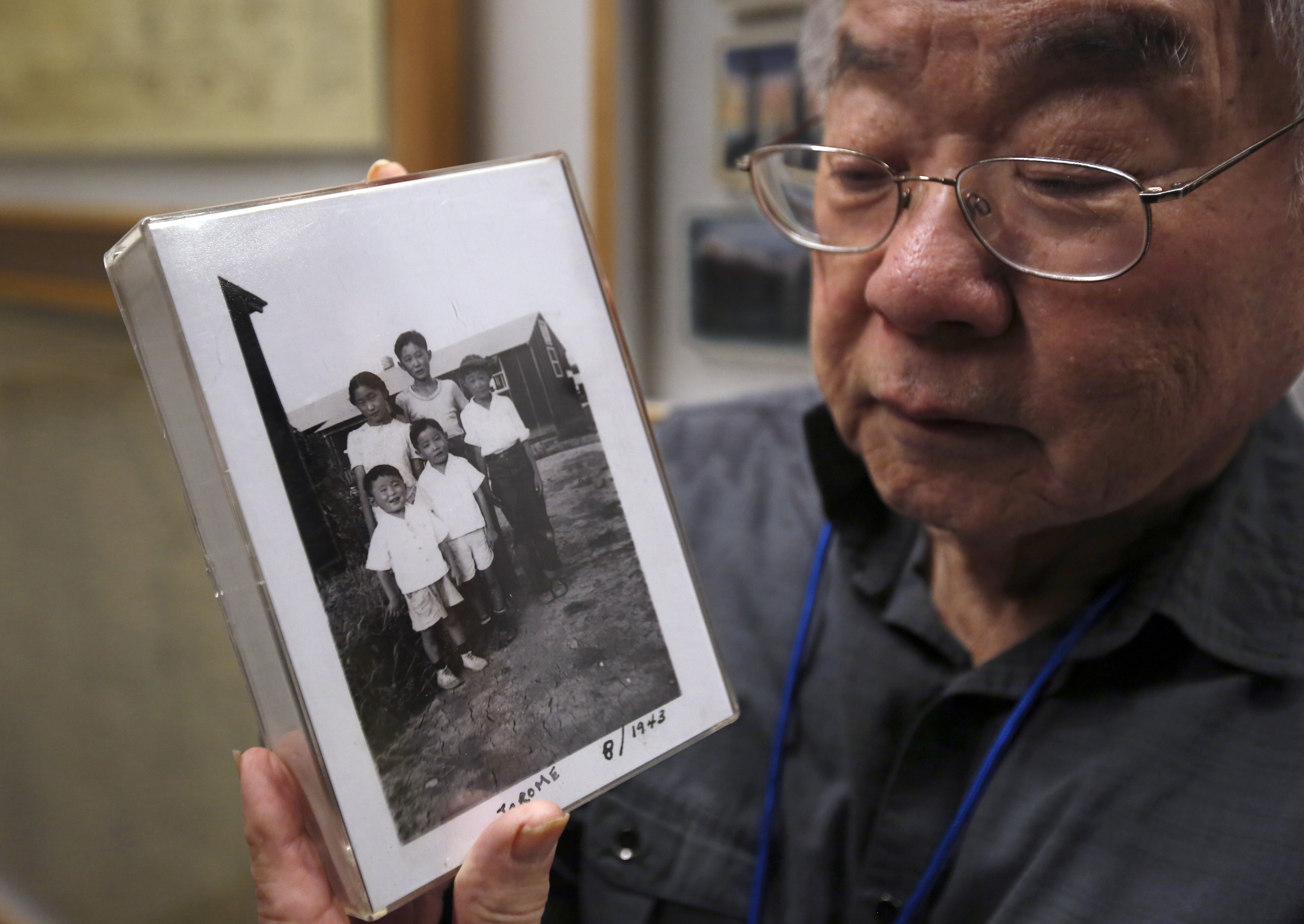 In this photo taken Tuesday, Feb. 11, 2020, Les Ouchida holds a 1943 photo of himself, front row, center, and his siblings taken at the internment camp his family was moved to, as he poses at the permanent exhibit titled “UpRooted Japanese Americans in World War II” at the California Museum in Sacramento, Calif. Ochida, who is a docent for the exhibit, and his family were forced to move in 1942 from their home near Sacramento to a camp in Jerome, Arkansas. Assemblyman Al Muratsuchi, D-Torrence has introduced a resolution to apologize for the state’s role in carrying out the federal government’s internment of Japanese-Americans. A similar resolution will be brought up before the state Senate by Sen. Richard Pan, D-Sacramento.(AP Photo/Rich Pedroncelli)

SACRAMENTO, Calif. (AP) — Les Ouchida was born an American just outside California’s capital city, but his citizenship mattered little after Japan bombed Pearl Harbor and the United States declared war. Based solely on their Japanese ancestry, the 5-year-old and his family were taken from their home in 1942 and imprisoned far away in Arkansas.

They were among 120,000 Japanese Americans held at 10 internment camps during World War II, their only fault being “we had the wrong last names and wrong faces,” said Ouchida, now 82 and living a short drive from where he grew up and was taken as a boy due to fear that Japanese Americans would side with Japan in the war.

On Thursday, California’s Legislature is expected to approve a resolution offering an apology to Ouchida and other internment victims for the state’s role in aiding the U.S. government’s policy and condemning actions that helped fan anti-Japanese discrimination.

President Franklin D. Roosevelt’s executive order No. 9066 establishing the camps was signed on Feb. 19, 1942, and 2/19 now is marked by Japanese Americans as a Day of Remembrance.

Assemblyman Al Muratsuchi was born in Japan and is one the roughly 430,000 people of Japanese descent living in California, the largest population of any state. The Democrat who represents Manhattan Beach and other beach communities near Los Angeles introduced the resolution.

“We like to talk a lot about how we lead the nation by example,” he said. “Unfortunately, in this case, California led the racist anti-Japanese American movement.”

A congressional commission in 1983 concluded that the detentions were a result of “racial prejudice, war hysteria and failure of political leadership.” Five years later, the U.S. government formally apologized and paid $20,000 in reparations to each victim.

The money didn’t come close to replacing what was lost. Ouchida says his father owned a profitable delivery business with 20 trucks. He never fully recovered from losing his business and died early.

The California resolution doesn’t come with any compensation. It targets the actions of the California Legislature at the time for supporting the internments. Two camps were located in the state — Manzanar on the eastern side of the Sierra Nevada in central California and Tule Lake near the Oregon state line, the largest of all the camps.

“I want the California Legislature to officially acknowledge and apologize while these camp survivors are still alive,” Muratsuchi said.

He said anti-Japanese sentiment began in California as early as 1913, when the state passed the California Alien Land Law, targeting Japanese farmers who some in California’s massive agricultural industry perceived as a threat. Seven years later the state barred anyone with Japanese ancestry from buying farmland.

The internment of Ouchida, his older brother and parents began in Fresno, California. Three months later they were sent to Jerome, Arkansas, where they stayed for most of the war.

Given their young ages at the time, many living victims such as Ouchida don’t remember much of life in the camps. But he does recall straw-filled mattresses and little privacy.

Communal bathrooms had rows of toilets with no barriers between users. “They put a bag over their heads when they went to the bathroom” for privacy, said Ouchida, who teaches about the internments at the California Museum in Sacramento.

Before the last camp was closed in 1946, Ouchida’s family was shipped to a facility in Arizona. When the family was freed, they took a Greyhound bus back to California. When it reached a stop sign near their community outside Sacramento, “I still remember the ladies on the bus started crying,” Ouchida said. “Because they were home.”

The resolution, co-introduced by California Assembly Republican Leader Marie Waldron of Escondido, makes a passing reference to “recent national events” and says they serve as a reminder “to learn from the mistakes of the past.”

Muratsuchi said the inspiration for that passage were migrant children held in U.S. government custody over the past year.

Ouchida said Japanese families like his always considered themselves loyal citizens before and after the internments. He holds no animosity toward the U.S. or California governments, choosing to focus on positives outgrowths like the permanent exhibit at the California Museum that provides an unvarnished view of the internments.

“Even if it took time, we have the goodness to still apologize,” he said.