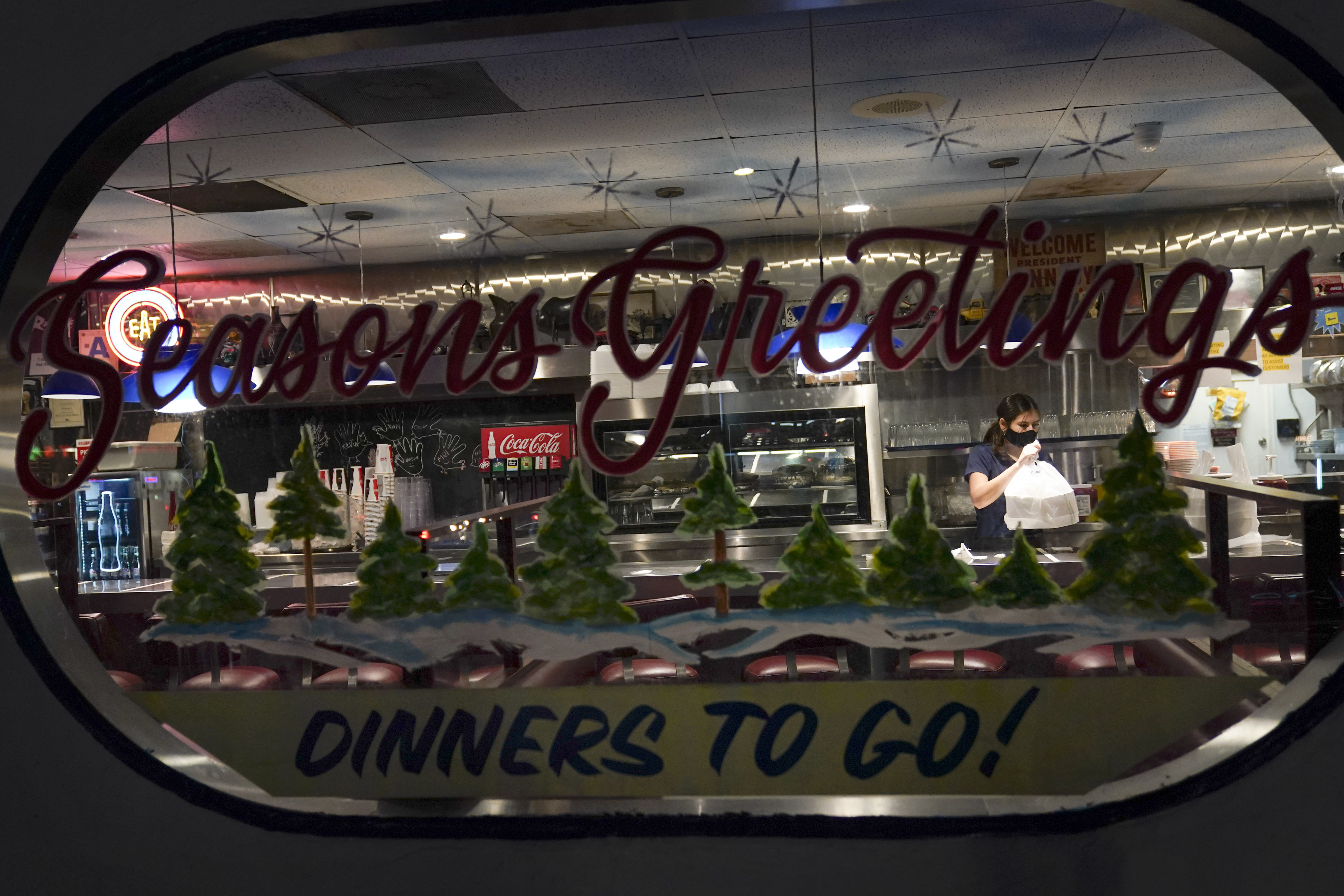 A waitress prepares a takeout order at Rudford’s Restaurant Tuesday, Nov. 24, 2020, in San Diego. California’s health secretary urged people to say “no” to family and friends who want to gather for Thanksgiving, joining other officials in issuing dire warnings about the spread of the coronavirus. (AP Photo/Gregory Bull)

LOS ANGELES (AP) — With California desperately battling an out-of-control coronavirus surge, the state’s health secretary is urging families to avoid gathering for Thanksgiving and Los Angeles County appeared on the brink of issuing a stay-home order to prevent hospitals from being overwhelmed.

“It’s as important to say no even when it comes to the closest people in our family,” Dr. Mark Ghaly said as counties continued to see record COVID-19 infection caseloads and hospitalizations.

Ghaly, whose mother won’t be at his family’s dinner table this year, said it wasn’t too late to cancel or change plans to limit Thanksgiving celebrations to immediate family.

Residents were urged to avoid nonessential travel during what is typically the busiest travel period of the year. Anyone entering California was advised to quarantine for two weeks.

Public health officials are bracing for a wave of cases in upcoming weeks that could stem from gatherings at Thanksgiving, particularly as people arrive or return from states or areas with higher infection rates.

“If you’re a public health person, you just start crying when you hear those numbers,” Ferrer said, noting the effect will likely be felt in the weeks to come because of a lag between exposure and developing symptoms of COVID-19.

The state has set records on several recent days for total infections detected. Hospitalizations statewide have increased 81% in the past two weeks and by nearly 400 patients in a day.

“Statewide, I don’t believe we’ve ever seen as many hospital admissions increase like we did just in the past 24 hours,” Ghaly said Tuesday.

Ghaly has said about 12% of those infected will wind up in hospitals.

The virus was spreading exponentially in some areas. Sacramento County on Tuesday reported nearly 1,000 new infections for its highest one-day total and three times the level of just a month ago.

Forty-five counties with nearly 95% of the state’s population are now in the state’s COVID-19 “purple” tier, which has the most restrictive rules for business operations. These include a ban on indoor dining, limiting outdoor dining capacity and a nighttime curfew.

Los Angeles County, the state’s largest, has seen a fourth of all COVID-19 cases and this week passed a threshold set by county public health officials to trigger a three-week stay-at-home order — the first major lockdown since spring.

The Department of Public Health did not immediately issue that order Tuesday but the rapid rise in cases made its adoption more and more likely.

“Our metrics are the most alarming metrics that we’ve ever seen,” county Public Health Director Barbara Ferrer said Tuesday. “Inaction in the face of this devastating acceleration of cases will cause irreparable harm.”

The county already has issued an order banning in-person restaurant dining as of Wednesday night for three weeks.

Restaurants, many already teetering financially, have argued that they have taken safety precautions and aren’t to blame for the surge.

However, Los Angeles County supervisors on Tuesday rejected a motion to allow restaurants to continue to serve meals outdoors at half their seating capacity.

Kathryn Barger, who was on the losing side of the 3-2 vote, said the closure of restaurants was “arbitrary and punitive” and that private gatherings and celebrations after the recent election, the World Series victory by the Dodgers and NBA championship win by the Lakers were larger sources of spread.

“I feel like the restaurant industry was basically used as a pawn,” Barger said.

Supervisor Sheila Kuehl, who said she had heard a “cacophony” of opposition from restaurant owners, said that closing restaurants was a difficult but necessary move.

“This is a serious health emergency and we must take it very seriously,” Kuehl said. “This is the only business that allows its customers to remain — and often for quite a while — unmasked. And that I think is enough to single it out right there.”

Restaurants went to court Tuesday to halt the restaurant closure from taking effect, but a Los Angeles judge rejected their case. The California Restaurant Association had argued that Los Angeles County health officials should have to provide medical or scientific evidence that outdoor restaurant dining poses an unreasonable risk to public health.