SAN DIEGO (AP) — Victor Caratini hit a two-run, game-ending homer two batters after Eric Hosmer hit a tying, two-run homer for the San Diego Padres, who beat the Cincinnati Reds in a 6-4 thriller before the first sellout crowd at Petco Park since 2019. 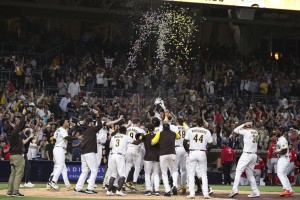 The San Diego Padres celebrate at home plate after Victor Caratini hit a home run against the Cincinnati Reds in the ninth inning of a baseball game Thursday, June 17, 2021, in San Diego. (AP Photo/Derrick Tuskan)

Fernando Tatis Jr. and Manny Machado also homered on what was billed as “San Diego’s Opening Day” to celebrate the ballpark returning to full capacity following the state’s reopening plan that went into effect Tuesday.

But the Padres had to work for this one after the Reds rallied for four runs in the ninth against closer Mark Melancon, including a go-ahead, two-run homer by rookie Jonathan India. The Padres won for just the second time in nine games.

The Reds had won six in a row.