Changed by pandemic, many workers won’t return to old jobs

(AP) – There’s a wild card in the push to return to pre-pandemic life: Many workers don’t want to go back to the jobs they once had.

Layoffs and lockdowns, combined with enhanced unemployment benefits and stimulus checks, gave many Americans the time and the financial cushion to rethink their careers. Their former employers are hiring again — and some, like Uber and McDonald’s, are offering higher pay — but workers remain hesitant.

In March, U.S. job openings rose 8% to a record 8.1 million, but overall hiring rose less than 4%, according to government data.

Nate Mullins quit his job as a bartender last November after clashing with managers over mask rules and worrying that he would spread the coronavirus to his immune-compromised sister.

Mullins’ unemployment checks don’t match what he was making at his Oak Harbor, Washington bar, but they’re enough to get by while he looks for jobs that would provide health care and retirement benefits.

“This opportunity to take a step back and really think about what you’re doing really changed my mind,” said Mullins, 36. “(It) made me think long-term for the first time.” 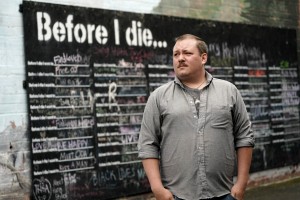 Nate Mullins, a former bartender from Oak, Harbor, Wash., who quit his job last November after clashing with managers over enforcing mask rules, poses for a photo near a street mural Monday, May 17, 2021, in Mount Vernon, Wash. There’s a wild card in the push to return to post-pandemic life: many workers don’t want to return to the jobs they once had. Mullins’ unemployment checks don’t match what he was making at the bar, but they’re enough to get by while he looks for jobs that would provide health care and retirement benefits. (AP Photo/Elaine Thompson)

Workers like Mullins are one reason U.S. hiring slowed in April. Employers and business groups argue that the $300-per-week federal unemployment supplement gives recipients less incentive to look for work. Several states have begun requiring those receiving the benefits to show they are actively searching for work, and a few will stop providing the supplement.

But Heidi Shierholz, a senior economist who researches low- and middle-income workers with the Economic Policy Institute, said health concerns and child care responsibilities seem to be the main reasons holding workers back.

In April, she said, at least 25% of U.S. schools weren’t offering in-person learning, forcing many parents to stay home. And health concerns could gain new urgency for some workers now that the U.S. Centers for Disease Control and Prevention has said fully vaccinated people can stop wearing masks in most settings.

Shierholz added that unemployment benefits are designed to give workers the time to find jobs that are better suited to their abilities.

“We want people well-matched to their skills and experience,” she said. “That’s what helps the economy run better.”

Higher pay for workers can push up inflation, which jumped in April as the economy struggled with widespread shortages of raw materials and parts amid a faster-than-expected reopening. If companies are forced to raise prices to cover the cost of higher wages, that could slow the recovery and reduce Americans’ purchasing power.

For now, most economists see labor shortages as likely to be temporary. As more Americans are vaccinated, fewer will worry about getting sick at work. Schools should reopen in September, freeing more parents to return to work, and the extra $300 in unemployment aid is also set to expire in early September. Those steps should bring more people into the job market.

Sarah Weitzel gave birth to her second child in February 2020. She was on leave from her job at a Victoria’s Secret store in St. Louis when the pandemic threw her life into chaos.

She got a text telling her she was furloughed. Then her husband lost his restaurant job. In financial straits, they sold their home, moved in with friends, survived on unemployment insurance and fell deeper into debt.

In the fall, Victoria’s Secret offered Weitzel part-time work that would pay $12 an hour, but she declined. She and her husband, who now works long hours at a new restaurant job, can’t afford child care.

“Something just kind of broke, where I thought about how hard I was working for this job that paid about $32,000 a year,” Weitzel said.

Weitzel, 31, got accepted to Rung for Women, a St. Louis program that offers career coaching and training for jobs in high demand, including banking, health care, customer service and technology. In the fall, when her oldest daughter starts preschool, Weitzel hopes to get part-time work in a new career.

Mark Smithivas drove for Uber and Lyft for four years before he abruptly quit last spring out of concern for his health. He has spent the last year taking technology classes in a federal worker training program.

Smithivas, 52, just got his second vaccination, but he doesn’t want to go back to ride-hailing. He worries about carjackings and other crimes targeting drivers in Chicago, where he lives.

“I always viewed this job as temporary, and I really do want to find something that fits my career and background better,” he said.

Some workers say the pandemic helped them prioritize their mental and physical health.

After a lifelong career as a bartender, 57-year-old Ellen Booth was in constant pain from lifting ice buckets and beer kegs. But without a college degree, she felt she had limited options. 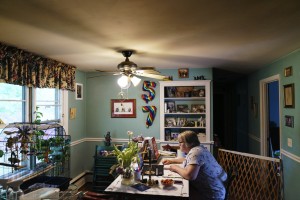 Ellen Booth, 57, studies at her kitchen table to become a certified medical coder, in Coventry, R.I., Monday, May 17, 2021. When the restaurant she worked for closed last year, Booth said it gave her “the kick I needed.” She started a year-long class to learn to be a medical coder. When her unemployment benefits ran out two months ago, she started drawing on her retirement funds. Booth hopes to pass her upcoming exam and soon hit the job market. (AP Photo/David Goldman)

When the restaurant she worked for closed last year, she said it gave her “the kick I needed.” Booth, of Coventry, Rhode Island, started a year-long class to learn to be a medical coder. When her unemployment benefits ran out two months ago, she started drawing on her retirement funds. Booth will take an exam in the coming weeks to get certified, after which she will hit the job market.

Shelly Ortiz, 25, used to love her career as a restaurant server. But things changed last June, when her Phoenix restaurant reopened its dining room. She wore two masks and glasses to protect herself, but still felt anxiety in a restaurant full of unmasked diners.

Sexual harassment also got worse, she said. Patrons would ask her to pull down her mask so they could see how cute she was before tipping her.

Ortiz quit in July after she learned that the restaurant didn’t deep-clean the bar after a bartender was potentially exposed. She and her partner, a teacher, curtailed their spending, and Ortiz returned to school full time. This month, she is graduating from Glendale Community College with a degree in film and a certificate in documentary directing.

Ortiz stopped getting unemployment benefits in November, when she did some part-time film work. Money is tight, she said, but she’s never been happier. And she doesn’t think she’ll ever be a restaurant server again.

“I don’t know if I could do it with a smile anymore,” she said. “I don’t think it should be an option for anyone to treat any worker the way that service industry workers are treated in America.”

In a tight labor market, some workers are also finding that if they hold out, they might get a better job than the one they left.

“They didn’t value the work I put in, the time I put in, because I got laid off,” said Henderson, 24, a college student who lives in Austin, Texas. “It was just really discouraging.”

At first she focused on her schoolwork, living on her unemployment checks and a severance payment that gave her 10 weeks’ worth of pay. But soon she was anxious to work again, and thought a new job that valued her more would make her feel better.

After a few months of searching, she found another job with a music streaming service. She’ll start later this month and will make $10 more per hour than the $17 she made at Best Buy.

“As long as I’m making enough money that I can support myself, the people that I love and I can get to travel every once in a while, I’m good,” said Henderson. “I think this job will afford me the opportunities to do that.”