Chargers’ Gordon trying not to make contract a distraction

COSTA MESA, Calif. (AP) — Melvin Gordon is happy to be back with his Los Angeles Chargers teammates and going through workouts at this week’s mandatory minicamp.

Whether or not he is back for the start of training camp remains to be seen.

Gordon is going into the final year of a rookie contract and will earn $5.6 million this season. The fifth-year running back said after Tuesday’s practice that he didn’t want to miss any practices but also didn’t rule out not being present when the team conducts its first training camp practice on July 25. Gordon’s agent and the team are in discussions, but nothing is resolved.

“We’re going to see. I would like to go out there and have it done. We’re talking right now, and that’s kind of where I’m going to leave it,” he said.

Gordon was a huge reason why the Chargers made the playoffs for the first time since 2013 last season. He was sixth in the AFC in yards from scrimmage (1,375), ninth in rushing (885 yards) and scored 14 touchdowns en route to making his second Pro Bowl. 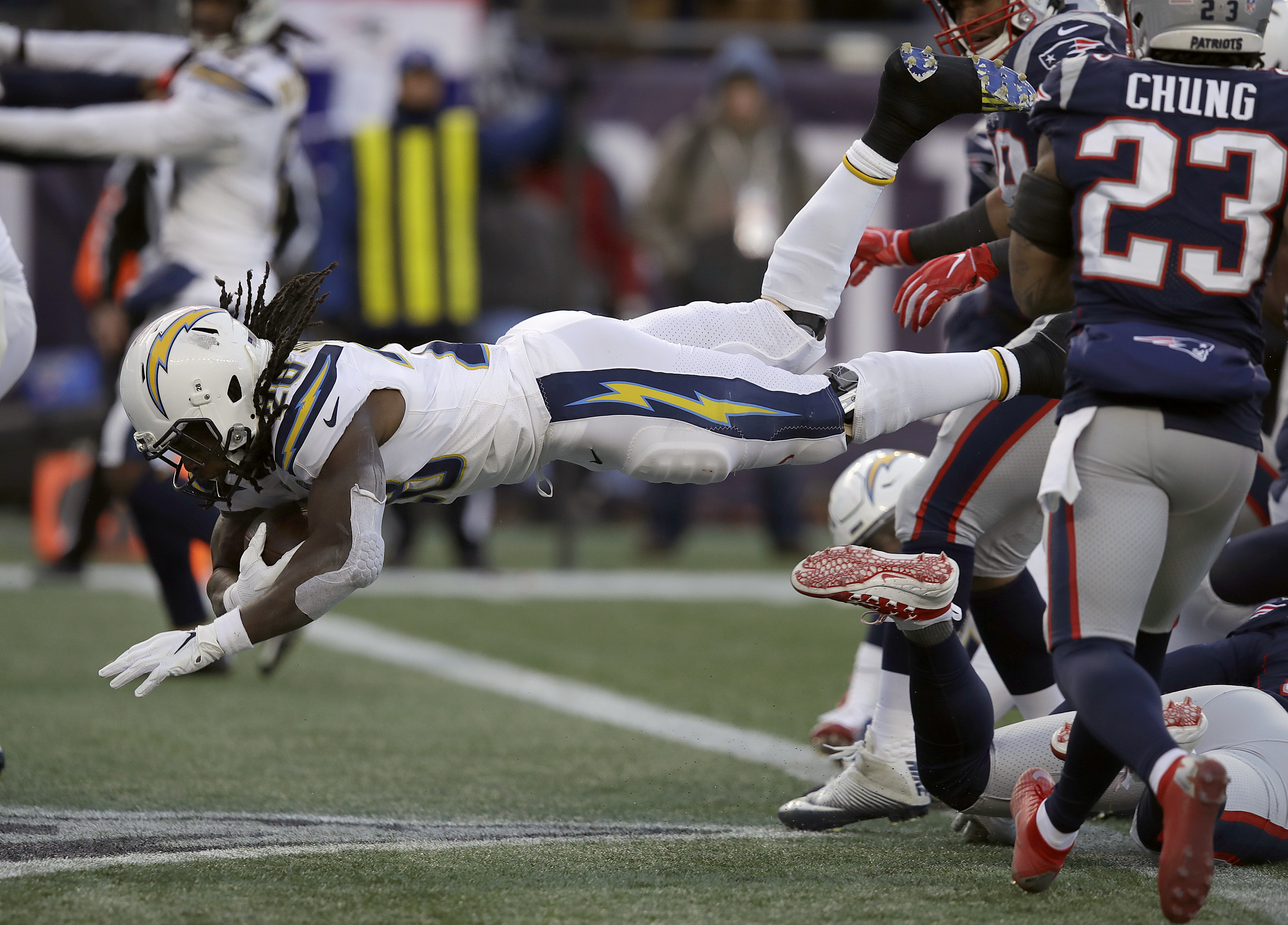 Los Angeles Chargers running back Melvin Gordon, left, dives into the end zone for a touchdown during the second half of an NFL divisional playoff football game against the New England Patriots, Sunday, Jan. 13, 2019, in Foxborough, Mass. (AP Photo/Charles Krupa)

Gordon said he is caught up in what has been a trend throughout the league — the undervaluing of running backs.

“We’re definitely devalued. That’s kind of how we are looked upon right now,” he said. “I know what I bring to this team, and I’m sticking with that.”

Despite three straight seasons with over 1,200 yards from scrimmage and 10 or more touchdowns, there are some durability questions about Gordon. He missed four games last season, including a three-game stretch in December after spraining the MCL in his right knee. Gordon returned for the Chargers’ final four games, which included the playoffs, but he was not the same back. He averaged 5.2 yards before the knee injury but only 2.9 yards when he returned.

“I kind of felt later in the year and in the playoffs that I wasn’t my best. It kind of sucked not being at my full potential and not giving it everything I have even though I did what I could,” he said.

Gordon took a couple months to get healthy at the end of last season before beginning his offseason program. He spent most of the offseason training in Florida with other NFL running backs before rejoining the team this week.

“Everything. It’s a wide range of speed, power, explosiveness. We’re doing catching drills,” Gordon said when asked what he worked on. “I’m trying to be well-rounded and work on my all-around game.”

Coach Anthony Lynn said one of his biggest goals during training camp will be to make sure the veteran players do not get too much work during the preseason with the idea that it will help his team be healthier late in the season.

Gordon could also benefit from added depth in the backfield. Austin Ekeler was a good change-of-pace back last season while Justin Jackson and Detrez Newsome showed some flashes late last year. Lynn lauded Newsome on Tuesday for how much he has improved during offseason workouts.

However, Gordon remains the leader of the group.

“Melvin Gordon is extremely important to us. He’s gotten better every year that I’ve been here,” Lynn said. “If he just goes out and keeps doing what he’s been doing, that contract stuff will take care of itself.”

NOTES: OT Russell Okung is not at minicamp due to an undisclosed injury. Lynn did not say if the veteran left tackle would miss the start of training camp. … First-round pick DT Jerry Tillery has signed his contract. Five of the seven draft picks are under contract with S Nasir Adderley (second round) and OT Trey Pipkins (third round) unsigned.

The Latest: Arizona restaurants told to cut to half capacity