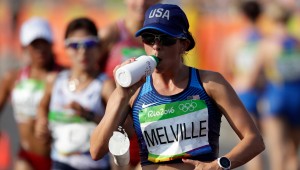 The 2016 Olympian completed 28 laps of the 1.25K course on Riverview Parkway and Town Center Parkway adjacent to the Trolley Square Mall in three hours, 18 seconds, breaking the previous record of 3:00:43 set by Katie Burnett in 2017.

The race’s $50,000 purse was the largest for any race or endurance event in the San Diego area.

This is the ninth consecutive year and 12th time in 14 years the championships have been held in Santee.