Part 1: How are club sports operating?

On March 23, the game changed in professional and college sports. And by changed…they meant came to a halt.

And in the spirit of the times, that trickle down eventually hit the high school scene.

But when sports went away for high schoolers, it didn’t mean just inside of high school. Club sports are a year round enterprise…one that suddenly found the windows down and door closed in the midst of training, playing, and recruiting. 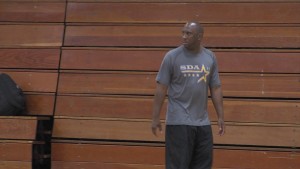 April is a big month on the basketball trail – especially for seniors trying to get a last look.

“They have two live periods coming up,” San Diego All Stars Basketball coach Marshawn Cherry said. “[That’s] when D1 and D2 scouts come see them to play. We’re hoping that with everything pushed back they’ll change the dates and give these guys opportunities.

“With juniors, with it being their biggest summer, they’ll need time to be seen and get out and play.”

“When basketball consumes your life, you don’t realize how much it consumes your life until you can’t do it anymore,” SDA assistant Luther Bellamy said. “You’re trying to find the time to fill the space. It’s important to stay positive.”

“It hurts teams in their continuity,” Cherry added. “It hurts the whole basketball population.” 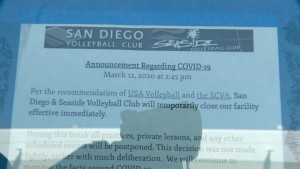 This note hangs on the front door of the San Diego Volleyball Club, explaining why they’re not in operation.

Seaside Volleyball in 4S Ranch has girls and boys to pay attention to. While the boys wouldn’t be in play until after the spring session, they can still work on skills and drills in open time. But that won’t change until the national office and the CDC clear it. More waiting. More wondering.

“We want to get the boys back in the gym as soon as possible,” director Russ Bird said. “They’re not playing when they normally are…and when they come back from high school season they’re in good form for club season and right now they aren’t.”

Recruiting is the bread and butter – the big reason why parents and guardians pay the money for private lessons. The NCAA’s freezing of normal recruiting, plus the work stoppage on the prep level, has long term consquences.

“Kids can contact coaches, but they can’t see them out playing,” Bird said. “The meat of the girls season is being really disrupted. Even if we go back in the gym and have tournaments….it won’t be pretty.” 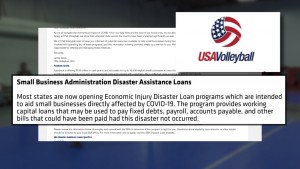 USA Volleyball has been in the fight alongside their clubs, posting assistance tips on their website.

Seaside Volleyball has been around since 1989, but if it wants to make it past the 30th anniversary, it needs help from the likes of McConnell, Pelosi and local officials.

Clubs like Seaside stay operational thanks to leasing a facility. When no new money is coming in, those clubs need help through small business loan policy like the Paycheck Protection Program.

“That small business loan that went through Congress is something that the clubs will be looking into to get through the next few months,” Bird said.

USA Volleyball lists ways their clubs can look for extra funds in this unprecedented time. AAU does not have that, since most clubs rent time from gyms and fields. In SDA basketball’s case,  Cherry rents court time from Mission Bay High School, where he’s the coach.

In inaugural address, Biden will appeal to national unity

The Latest: Slovakia wants tests for nearly all in nine days

In inaugural address, Biden will appeal to national unity

Pedestrian dies in Oceanside after being hit by suspected drunken driver

Biden to prioritize legal status for millions of immigrants