DOWNTOWN (KUSI) – As investigators piece together what happened leading up a deadly wrong-way crash on June 4, the California Department of Transportation has confirmed to KUSI that upgrades to prevent wrong-way collisions are in the works. This includes upgrades to the portion of I-5 in San Ysidro where San Diego Police Department Detectives Ryan Park and Jamie Huntley-Park lost their lives. 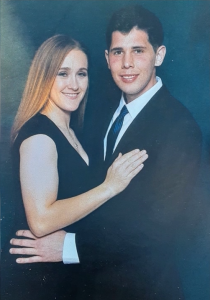 “There are plans to install additional wrong way driver enhancements on all of the off-ramps in San Diego County,” a spokesperson for CalTrans said. “There are more than 700 crews currently installing some along the I-15 Corridor.”

California Highway Patrol has not released further details into the identity of the woman driving on the wrong side of the freeway, nor where she may have entered going the wrong direction.

It comes as the community mourns the loss of the two officers in a growing memorial outside San Diego Police Headquarters. About 200 people gathered to pay their respects in the couple’s Escondido neighborhood on the night of June 6, two days after their passing.

“As you can see by the folks around us, they were valued and cherished by the SDPD and they loved their work,” said close family friend Alex Morrison.

Neighbors, loved ones, strangers, and fellow police officers from a number of departments were there to mourn and grieve the loss being felt throughout the community.

“We’re all supposed to be sad after what happened on Friday, we’re supposed to grieve, we’re supposed to cry,” Morrison said. “With this awful tragedy, we all have a few things we can bring into our lives that will help keep Jamie and Ryan alive within our communities.”

Morrison encouraged the community to love unconditionally, take advantage of opportunists, live with no regrets, hold one another, laugh when you can, and always try to find a reason to smile. 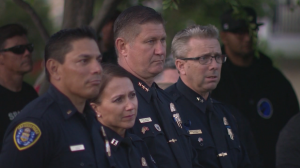 SDPD mourned the loss of their fellow colleagues.

Jamie, a La Jolla-native, was also the head coach of the San Diego Angels ice hockey team. A number of the players attended the June 6 vigil.

“To the angels, you now have a new angel that will always be watching over you,” said neighbor Brad Thomas. “It’s your responsibility now to always remember her, always play for her.”

Chief Nisleit also took time to speak about the detectives whom he promoted on the very same day in 2018.

“I’ve seen your faces. I’ve seen how this hurts,” he said. “They’d want us to carry on and continue to do our job and continue to serve the public like we know how and that’s doing the very, very best that we can.”

A memorial fund has been set up by the San Diego Police Officers Association with all donations going directly to Jamie and Ryan’s family. More information here: https://nep.regfox.com/sdpoa-widowsandorphansfund?ref=NEP