SAN DIEGO (KUSI) – For 39 years, the Hunter family has represented San Diego in the 50th Congressional District, but that may come to an end next year.

Hunter is charged with using campaign funds for personal expenses, ranging from groceries to family vacations. The trial date for Congressman Duncan D. Hunter’s corruption charges was scheduled for Jan. 22, 2020.

In an exclusive interview with KUSI’s Steve Bosh, Congressman Duncan D. Hunter announced that he will plead guilty to one count of misuse of campaign funds in Tuesday’s court appearance.

The congressman said that he will admit to one count of misusing campaign funds, saying he was doing so for the sake of his three children.

His wife, the former campaign treasurer, previously admitted her role in the campaign finance scandal.

Hunter, who had planned to seek another term in the November 2020 election, indicated in the interview that he would step down, while stressing that it’s important to keep the seat in Republican hands. Hunter said his office “would remain open” and that there would be a “seamless transition to whoever takes this seat next.”

Hunter’s announcement was updated on the U.S. District Court docket Monday morning. His change of plea hearing is set for December 3, 2019 at 10:00 AM before Judge Thomas J. Whelan.

Hunter, 42, was indicted along with his wife on five dozen criminal counts, including wire fraud, conspiracy and falsification of records, and was facing a Jan. 22 trial date.

Hunter said that while he expects to spend time in custody, he hopes that his wife will not be incarcerated as “I think my kids need a mom in the home.”

Duncan D. Hunter was re-elected last November with 51.7% of the vote in the 50th Congressional District, despite being indicted three months prior. He was first elected in 2008, succeeding his father, who held the congressional seat for 28 years.

Since the charges were brought against Hunter, several challengers have entered the race for the 50th Congressional District, most of whom are fellow Republicans. 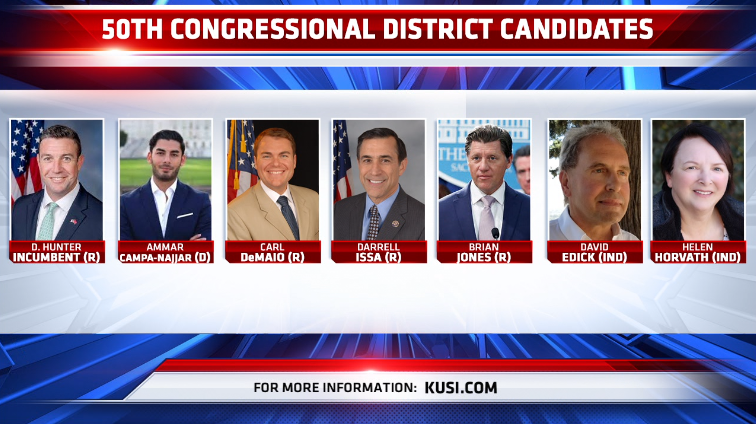 “As a friend and a colleague, I thank Duncan Hunter for his service to our country in the Marine Corps and in Congress, where he has always been a strong conservative voice on behalf of his constituents. Though his misuse of campaign funds was clearly wrong, I wish him and his family the best as they address the matters ahead of them.”

Issa stopped by the KUSI News studio Monday morning to further explain what Hunter’s guilty plea means, and how it impacts the highly contested race for the 50th Congressional District. His complete remarks can be seen here.

Former San Diego City Councilman Carl Demaio, who is challenging Hunter for the seat, issued a statement Monday regarding the development.

“While this must have been a tough decision for him, Congressman Hunter’s decision to plead guilty is the right one for his family and his constituents and shows that no one should be above the law — especially members of Congress,” he said. “My thoughts and prayers are with the Hunter family as they go through this difficult process.”

#KUSINews Exclusive: Congressman Duncan D. Hunter (@Rep_Hunter) announces that he will plead guilty to one count of misuse of campaign funds.

In an exclusive #KUSINews interview, Congressman Duncan D. Hunter says his "only hope is that the judge does not sentence my wife to jail."@Rep_Hunter's change of plea hearing will be before Judge Thomas J. Whelan on December 3, 2019.