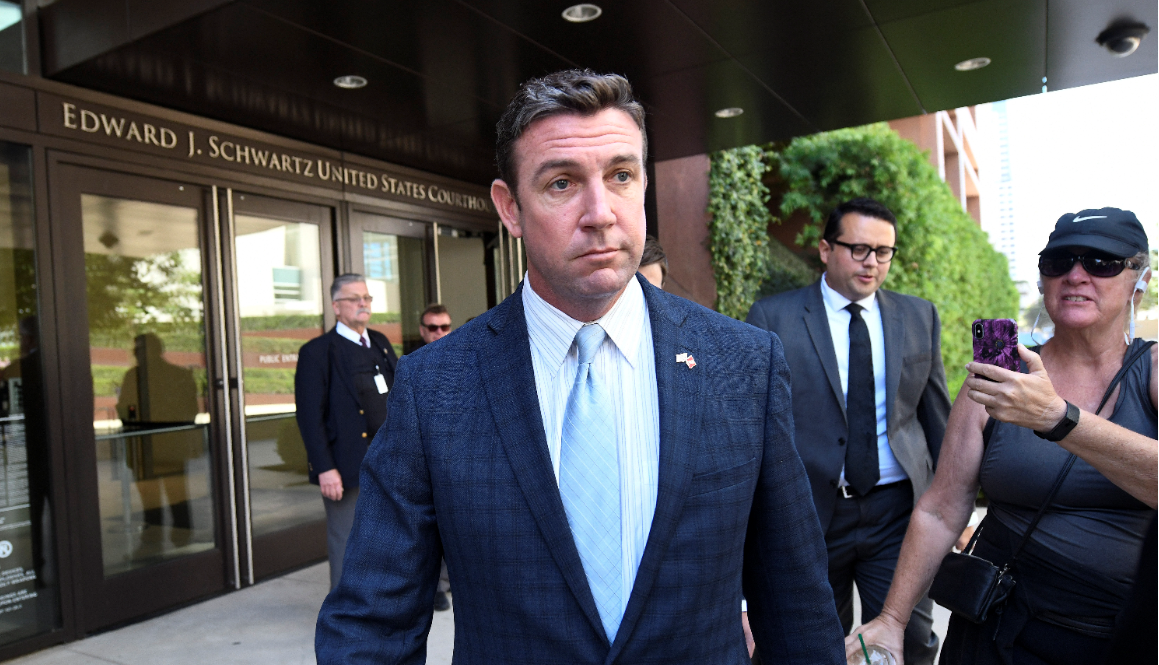 U.S. Rep. Duncan Hunter leaves federal court after a motions hearing Monday, July 1, 2019, in San Diego. U.S. Rep. Hunter of California is charged with looting his own campaign cash to finance vacations, golf and other personal expenses, then trying to cover it up. (AP Photo/Denis Poroy)

SAN DIEGO (KUSI) – Rep. Duncan Hunter, who pleaded guilty in December to a federal felony count for misusing $250,000 in campaign funds, announced Tuesday he will resign from Congress effective next Monday.

The Alpine Republican is facing a potential five-year prison sentence and said previously he would step down from his post, but he had not given a date for his departure.

“It has been an honor to serve the people of California’s 50th District, and I greatly appreciate the trust they have put in me over these last 11 years,” Hunter wrote.

In the letter, Hunter highlighted accomplishments and during his tenure in Congress, “from making sure veterans received the benefits they earned, to helping Social Security and Medicare recipients cut through red tape, to assisting immigrants seeking legal citizenship, and countless others going up against the IRS, ATF or other government agencies.”

He also noted his military service and his upbringing.

“Growing up in East County San Diego, I learned from an early age the importance of liberty, the value of patriotism and what a strong and secure border can bring to a community,” he wrote.

Political Expert John Dadian was in studio to discuss what’s next for the 50th Congressional District:

Hunter, who had been planning to seek another term in the November 2020 election, is scheduled to be sentenced March 17.

The 42-year-old former Marine was indicted along with Margaret Hunter, his wife on five dozen criminal counts, including wire fraud, conspiracy and falsification of records, and had been facing a Jan. 22 trial date.

Hunter told KUSI last month that while he expects to spend time in custody, he hopes that his wife will not be incarcerated as “I think my kids need a mom in the home.”

Prosecutors said Hunter and his wife went on expensive family trips and made scores of other improper personal purchases over the course of six years. Supposedly campaign-related events were planned around their family vacations in order to justify the expenses, prosecutors said.

It was also alleged that Hunter used campaign funds to pursue extramarital affairs and repeatedly used campaign credit cards or sought reimbursement for expenses that included resort hotel rooms, airfare, a skiing trip and Uber rides to and from the homes of five women with whom he had “intimate relationships.”

Hunter had repeatedly maintained his innocence and accused the U.S. Attorney’s Office of a politically motivated prosecution. He maintained that two prosecutors on the case attended a La Jolla campaign event for then- Democratic presidential frontrunner Hillary Clinton in 2015, then indicted him two months before the 2018 election due to his public endorsement of Donald Trump.

Former San Diego City Councilman Carl DeMaio, who is running for Hunter’s seat, urged Newsom to call a special election to fill the seat as soon as possible.