CORONADO (KUSI) – An investigation is underway following an incident that took place in the aftermath of a CIF basketball game over the weekend.

Following the buzzer, coaching staff on both sides started arguing and that’s when at least two Coronado players/fans threw tortillas at the Orange Glen team, which has many hispanic players.

The Coronado School Board sent a letter of apology to the Escondido Union High School District, as well as Orange Glen High School athletes, parents, teachers and staff.

An emergency special meeting of the board is set to take place on Tuesday.

CIF also issued a statement saying it has begun an “immediate review” of the incident. The letter reads it “prohibits discrimination or any acts that are disrespectful or demeaning toward a member school, student-athlete, or school community. We are therefore working with the administration of both high schools in addressing this matter and upon receipt and reveiw of incident reports from both schools, the CIF will determine the appropriate next steps.” 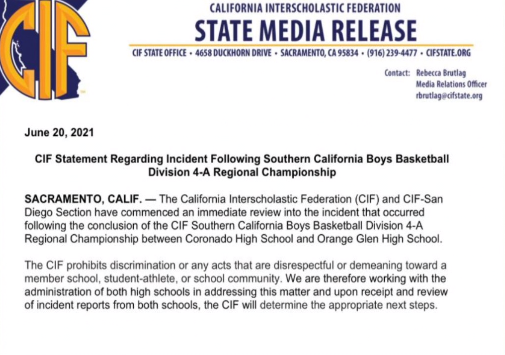