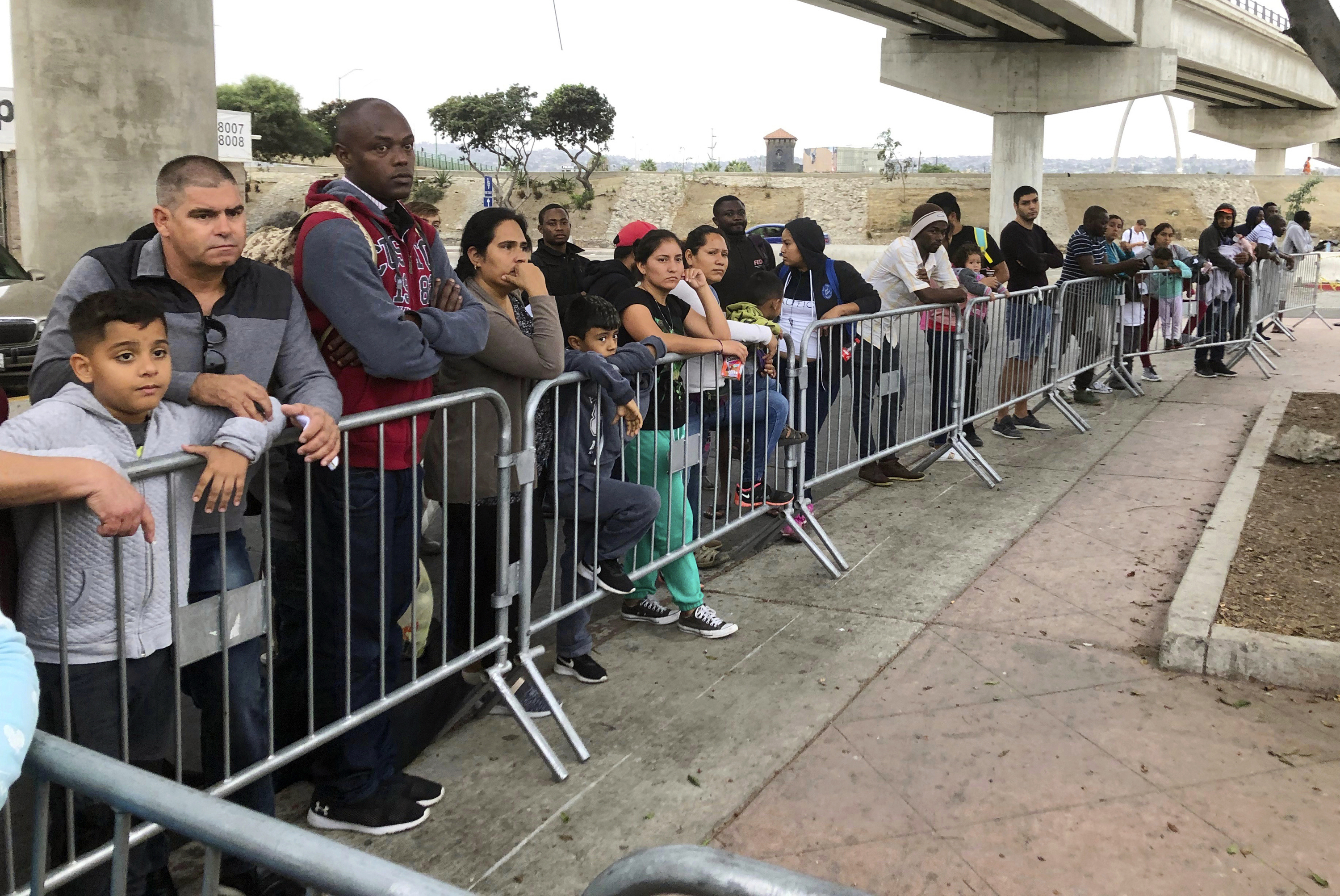 FILE – In this Sept. 26, 2019 file photo, asylum seekers, in Tijuana, Mexico, listen to names being called from a waiting list to claim asylum at a border crossing in San Diego. A federal appeals court has temporarily halted a major Trump administration policy to make asylum seekers wait in Mexico while their cases wind through U.S. immigration courts. A panel of the 9th U.S. Circuit Court of Appeals in San Francisco ruled Friday, Feb. 28, 2020 in a 2-1 vote to put on hold the policy that furthered President Donald Trump’s asylum crackdown. (AP Photo/Elliot Spagat, File)

SAN DIEGO (AP) — Dealing a significant blow to a signature Trump administration immigration policy, a federal appeals court ruled Friday that the government can no longer make asylum seekers wait in Mexico while their cases wind through the U.S. immigration courts.

The same court, based in San Francisco, decided to keep another major change on hold, one that denies asylum to anyone who enters the U.S. illegally from Mexico.

The twin setbacks for the Trump administration may prove temporary if it appeals to the U.S. Supreme Court, which has consistently sided with the president on immigration and border security policies.

The “Remain in Mexico” policy, known officially as “Migrant Protection Protocols,” took effect in January 2019 in San Diego and gradually spread across the border. Nearly 60,000 people have been sent back to wait for hearings, and officials believe it is a big reason why illegal border crossings plummeted about 80% from a 13-year high in May.

Reaction to the decision was swift among immigration lawyers and advocates who have spent months fighting with the administration over a program they see as a humanitarian disaster, subjecting hundreds of migrants to violence, kidnapping and extortion in dangerous Mexican border cities. Hundreds more have been living in squalid encampments just across the border, as they wait for their next court date.

Advocates planned to have immigrants immediately cross the border and present the court decision to border authorities on Friday. Lawyers were hoping to get their clients before U.S. immigration court judges.

Judge William Fletcher, writing the majority opinion, sided with the American Civil Liberties Union and other advocacy groups who argued the policy violates international treaty obligations against sending people back to a country where they are likely to be persecuted or tortured on the grounds of race, religion, ethnicity, political beliefs or membership in a particular social group. The question before the judges was whether to let the policies take effect during legal challenges.

Fletcher agreed the government set the bar too high for asylum seekers to persuade officers that they should be exempt from the policy and didn’t provide enough time for them to prepare for interviews or consult lawyers. The judges said the government also erred by requiring asylum seekers to express fear of returning to Mexico to be considered for an exemption, instead of asking them unprompted.

Fletcher quoted at length asylum seekers who reported being assaulted and victimized in Mexico, saying it was “enough — indeed, far more than enough” to undercut the government’s arguments.

The Justice Department did not immediately respond to request for comment.

The ruling’s impact will be at least partially blunted by the expansion of other policies that were introduced in response to unprecedented surge of asylum seeking families that peaked last year, many of them from Guatemala, Honduras and El Salvador.

Under another new policy, Mexicans and Central Americans who fail an initial screening are rapidly deported without leaving Border Patrol stations, which gained notoriety last year for Homeland Security internal watchdog reports of squalid conditions in some Texas locations. The screening interview is designed to take place in one day and any appeals to an immigration judge within 10 days. Asylum-seekers are given up to 90 minutes to contact a lawyer.

Those policies for rapid deportations were introduced in October in El Paso, Texas, and extended across the border by this month.

The other measure with far-reaching consequences denies asylum to anyone who passes through another country on the way to the U.S. border with Mexico without seeking protection there first. That policy took effect in September and is being challenged in a separate lawsuit.

Supporters of the “Remain in Mexico” policy note it has prevented asylum seekers from being released in the United States with notices to appear in court, which they consider a major incentive for people to come.

The policy was introduced at the border crossing in San Diego and initially focused on Central Americans. By November, it had reached all major crossing corridors, the last one being Arizona.

Asylum-seekers from more than 40 nations had been sent back, with Hondurans accounting for more than one of three, according to Syracuse University’s Transaction Records Access Clearinghouse. Guatemalans were second, followed by Cubans and Salvadorans.

Mexicans are exempt under the policy, as are unaccompanied children.

Asylum has been granted in less than 1% of the roughly 35,000 cases that have been decided. Only 5% are represented by attorneys, many of whom are reluctant to visit clients in Mexico.

Will people from hot spots like Arizona be allowed to visit San Diego without a mandatory quarantine?

El Cajon Valley Braves back on the field for summer practice

SDFD warns people about the dangers of illegal fireworks

The Latest: Tokyo cases spike to highest number since May

Dr. Wilma Wooten's message to business owners forced to close, 'that has been a very small number'