WASHINGTON (AP) — The Senate parliamentarian dealt a potentially lethal blow Thursday to Democrats’ drive to hike the minimum wage, deciding that the cherished progressive goal must fall from a $1.9 trillion COVID-19 relief bill the party is trying to speed through Congress, Senate Democratic aides said.

The finding by Elizabeth MacDonough, the chamber’s nonpartisan arbiter of its rules, means Democrats face an overwhelmingly uphill battle to boost the minimum wage this year because of solid Republican opposition. Their proposal would raise the federal minimum gradually to $15 hourly by 2025, well above the $7.25 floor in place since 2009. 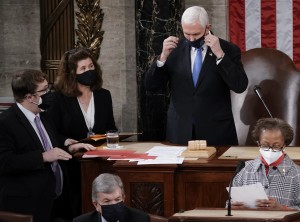 In this Jan. 6, 2021, photo, Senate Parliamentarian Elizabeth MacDonough, left, works beside Vice President Mike Pence during the certification of Electoral College ballots in the presidential election, in the House chamber at the Capitol in Washington. Shortly afterward, the Capitol was stormed by rioters determined to disrupt the certification. MacDonough has guided the Senate through two impeachment trials, vexed Democrats and Republicans alike with parliamentary opinions and helped rescue Electoral College certificates from a pro-Trump mob ransacking the Capitol. (AP Photo/J. Scott Applewhite)

President Joe Biden was “disappointed” in the outcome but respected the parliamentarian’s ruling, White House press secretary Jen Psaki said. The Senate has a long tradition of obeying the parliamentarian’s decisions with few exceptions, a history that is revered by traditionalists like Biden, a 36-year Senate veteran.

“He will work with leaders in Congress to determine the best path forward because no one in this country should work full time and live in poverty,” Psaki said.

Democrats are pushing the massive coronavirus relief measure through Congress under special rules that will let them avoid a Senate filibuster by Republicans, a tactic that Democrats would need an unattainable 60 votes to defeat.

But those same Senate rules prohibit provisions with only an “incidental” impact on the federal budget because they are chiefly driven by other policy purposes. MacDonough said the minimum wage provision didn’t pass that test, according to aides who described her decision on condition of anonymity because it hadn’t been released.

MacDonough’s decision forces Democrats to make politically painful choices about what to do next on the minimum wage, which has long caused internal party rifts.

Senate Majority Leader Chuck Schumer, D-N.Y., said Democrats “are not going to give up the fight” to raise the minimum wage to $15.

Sen. Lindsey Graham of South Carolina, top Republican on the Senate Budget Committee, hailed MacDonough’s decision. He said it shows the special procedure that Democrats are using to protect the relief bill “cannot be used as a vehicle to pass major legislative change — by either party — on a simple majority vote.”

Republicans solidly oppose the $15 minimum wage target as an expense that would hurt businesses and cost jobs. They also oppose the overall relief bill, saying it’s too expensive, not targeted enough at the people and businesses that most need it and a grab bag of gifts for Democratic allies.

In the wake of the decision, Democratic leaders were likely to face unrest from rank-and-file lawmakers, who have long had differences over the federal minimum wage. They can afford little dissension: Democrats have just a 10-vote edge in the House and no votes to spare in the 50-50 Senate.

Progressives seeking to maximize Democratic control of the White House and Congress have wanted party leaders to push aggressively on the issue. Rep. Pramila Jayapal, D-Wash., who leads the near 100-member Congressional Progressive Caucus, said Senate Democrats should include the wage increase in the relief bill anyway and not be stopped by “the advisory opinion of the parliamentarian and Republican obstructionism.”

But Democratic Sens. Joe Manchin of West Virginia and Kyrsten Sinema of Arizona have voiced opposition to including the minimum wage hike in the relief bill, and other moderates have expressed concerns, too.

Even so, MacDonough’s decision might actually make passage of the overall relief bill easier because efforts to find a minimum wage compromise among Democrats could have been contentious.

Democrats have said they could still pursue a minimum wage boost in free-standing legislation or attach it to legislation expected later this year that is to be aimed at a massive infrastructure program. But they’d still face the challenge of garnering 60 Senate votes, a hurdle that has upended Democratic attempts to boost the minimum wage for over a decade.

The parliamentarian’s decision came to light the night before Democrats were set to push through the House an initial version of the $1.9 trillion relief legislation that still includes the minimum wage boost.

The overall relief bill is Biden’s first legislative priority. It is aimed at combating a year-old pandemic that’s stalled much of the economy, killed half a million Americans and reshaped the daily lives of virtually everyone.

Despite their paper-thin congressional majorities, Democratic leaders were hoping that House approval of the package would be followed by passage in the Senate, where changes seem likely. Democrats are aiming to get the legislation to Biden’s desk by mid-March.

The relief bill would provide millions of people with $1,400 direct payments. It contains billions of dollars for vaccines and COVID-19 testing, schools, state and local governments, the ailing restaurant and airline industries and emergency jobless benefits while providing tax breaks to lower earners and families with children.

In a study that’s been cited by both sides in the clash, the nonpartisan Congressional Budget Office estimated that the $15 minimum wage would increase pay for 27 million workers and lift 900,000 people out of poverty by 2025, but also kill 1.4 million jobs.

Seven states have laws putting their minimums on a pathway to $15 in a future year, according to the nonpartisan National Conference of State Legislatures.