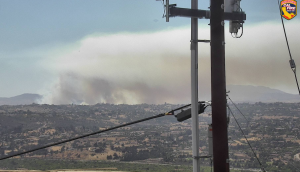 UPDATE: As of 7:25 p.m. on June 9, the fire is at 925 acres with no containment, said Camp Pendleton Fire Department. CPFD is remaining on site to work on the fire. More updates will come in the morning.

CAMP PENDLETON (KUSI) – A 1,000-acre wildfire, dubbed the Sierra Fire, is continuing to burn at Camp Pendleton as firefighters try to contain its spread on the military base’s northern side Wednesday afternoon.

The fire is located east of the 33 Area and authorities have issued mandatory evacuations for military base facilities such as those in the 25 Area (Vada Del Rio), which includes the areas of the Lake O’Neill Campground and Wounded Warrior Battalion, as well as 26 Area and 26 Area, according to a tweet from Camp Pendleton officials.

Northern San Diego County residents have seen plumes of dark smoke over their areas as parts of the brush-laden landscape have become covered in soot.

The fire started around 2:30 p.m., according to fire officials.

This week, fire crews have been starting and keeping their eyes on brush-clearing controlled burns, though it was not evident if this activity was related to the wildfire.

Paige Fieldhouse is being offered as an evacuation control center.

CPFD and neighboring fire departments are working to contain a fire of unknown size east of the 33 Area. The Evacuation Control Center is located at Paige Fieldhouse, as indicated by the “here” icon.

The cause of the fire is unknown. pic.twitter.com/1kQ8tCsAqS

CPFD reports fire is 925 acres, with no containment. CPFD will remain on site working the fire. More assets will arrive in the morning. More updates to follow in the morning.

This is a developing story. Keep checking back for updates.