SAN DIEGO (CNS) – Law enforcement officials today were asking for the public’s help in locating and identifying the suspect involved in two separate armed robberies this month. San Diego County Crime Stoppers was offering a reward of up to $1,000 for information on the man, who’s believed to have robbed a Game Stop in Serra Mesa on Dec. 19 and a Subway in Kearny Mesa four days later, according to the organization.

The man is also believed to have been spotted at another Game Stop on the same day as the Subway robbery.

Around 10:30 a.m. on Dec. 19, the suspect entered the Game Stop store on Murphy Canyon Road south of Aero Drive, where he lifted his shirt to display a silver revolver in his waistband and demanded money from the register, according to the Crime Stoppers news release.

The clerk complied, and the man left the store on foot. Around 9:20 a.m. on Dec. 23, a man believed to be the same suspect entered the Game Stop on University Avenue east of 44th Street. An employee recognized the man from the earlier robbery and told another worker to call security.

The suspect escaped from the store on foot. The same day, at about 11:20 a.m., it’s believed that the same suspect entered a Subway restaurant near the intersection of Clairemont Mesa Boulevard and Mercury Street.

He “simulated” that he had a gun in his waistband and demanded money from the register. The clerk complied, and the man again escaped on foot.

In the first case, he was wearing a white construction hat, construction glasses, a dark-blue or black bandana on his head underneath the hat, black pants and black tennis shoes with white soles, Crime Stoppers said.

During the second and third cases, the suspect was wearing an Anaheim Angels baseball cap, sunglasses, a dark-colored shirt, black pants and gray tennis shoes. He was also wearing an orange construction vest in the first and third robberies. 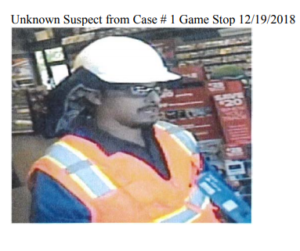 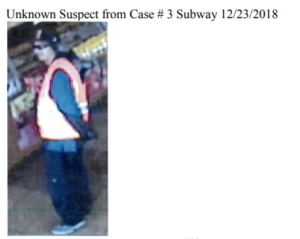 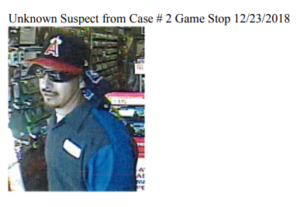