SAN DIEGO (KUSI) — The 14th Dalai Lama Friday shared a message about embracing diversity and living lives filled with kindness and compassion  when he spoke at UC San Diego in a sold-out appearance a day before speaking at the school’s invitation-only commencement ceremony.

Tenzin Gyatso, the exiled spiritual head and leader of the Tibetan people, was greeted by Mayor Kevin Faulconer upon arrival Thursday at Lindbergh Field. The mayor introduced the Dalai Lama at Friday’s speech at RIMAC Field.

"We are honored to host His Holiness the 14th Dalai Lama at UC San Diego and thankful that he will share messages of global compassion with our graduates and their families, as well as with a broad public audience," Chancellor Pradeep Khosla said earlier this year. "A man of peace, the Dalai Lama promotes global responsibility and service to humanity. These are the ideals we aim to convey and instill in our students and graduates at UC San Diego."

Faulconer called him "an inspiration to people across the globe."

"As a city that celebrates its diversity, spirit of collaboration and environmental leadership, we are proud to welcome one of the world’s great champions for peace and understanding to San Diego," the mayor said.

The 81-year-old Dalai Lama’s San Diego appearance is the first in a planned U.S. tour. He also visited UC San Diego five years when he spoke at the University of San Diego and San Diego State University — where he appeared before a crowd of 12,000 at Viejas Arena. At each address in April 2012, he wore his traditional clothing but also donned visors from each university.

More recently, he visited Orange County, celebrating his 80th birthday in July 2015 with a three-day series of addresses in Anaheim and at UC Irvine, where he joined a group of scientists and activists in a panel discussion titled "The Effects of Climate Change and Taking Action to Resolve this Global Issue." There, he stressed that residents need to care for the planet just like they care for their own home.

The message he shared Friday at UC San Diego was entitled "Embracing the Beauty of Diversity in our World."

"His Holiness will come to San Diego to share an authentic message of peace and human value as the students enter their professional lives," Lama Tenzin Dhonden, the Dalai Lama’s personal emissary, said earlier this year when the visit was announced.

"The seeds of kindness and compassion shall sprout through their future work and spread these basic values throughout the world," Dhonden said. "Parents and members of the community will be able to share the celebration of graduation while receiving this message."

The 1989 Nobel Peace Prize winner is the spiritual head of Tibetan Buddhism as well as a political leader, traveling the world advocating autonomy for his country, which is controlled by China. He lives in exile in India and travels the world sharing his message of peace, nonviolence and compassion.

Like Faulconer, former Mayor Jerry Sanders greeted the Dalai Lama at Lindbergh Field upon his arrival in 2012. Sanders said at the time that "there’s just a different aura about him” and that meeting him was "right up at the top" of his mayoral experiences.

More than $51,000 left over from his previous visit to the city — tickets to see him speak generally sold for $10 to $25 — were later donated to the Monarch School for homeless children. 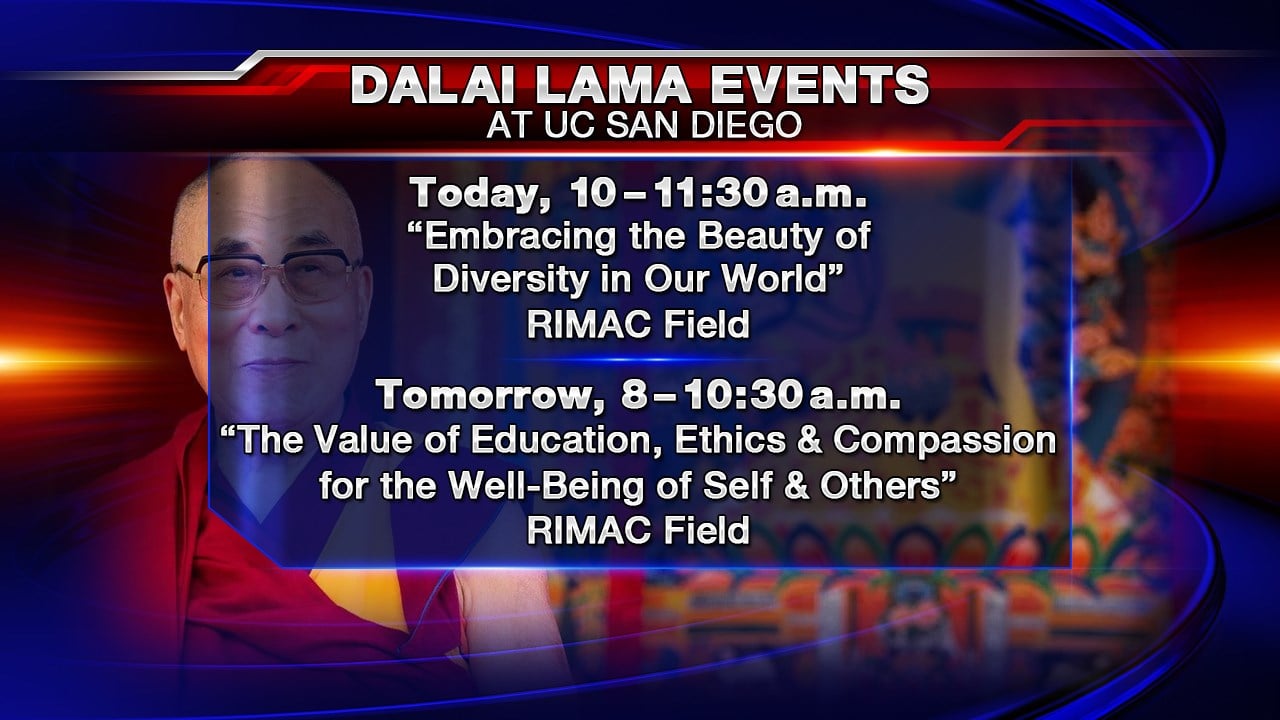